GI Joe: The Rise of Cobra 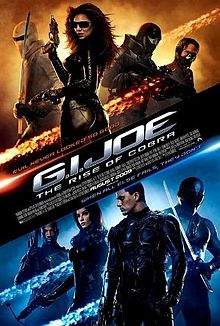 It seems nowadays that diversification is the key. Take Hasbro for example. No longer content to make toys that allow children to use their imaginations, they have followed Marvel into the blockbuster movie market.

Like their other big-selling toy Transformers, they have taken one of their older toys, G.I. Joe (or Action Man to us Brits), which also appeared as a comic book series as well as an animated series, and made a star-studded live action movie – with the emphasis on action.

Having given up playing with Action Man characters in my early teens, when they were simply regular soldiers, I wasn't really aware of the revitalised versions, at least not until my son arrived, and now they are movie characters in GI JOE: THE RISE OF COBRA directed by Stephen Sommers (of THE MUMMY fame). The big change is GI Joe is now a collective name for secret military organisation rather than a single person.

In what is clearly designed as an "origins" story, we see Duke (Channing Tatum) and Ripcord (Marlon Wayans) recruited into the GI Joe unit after the nanotech weapons they were transporting were stolen from them in a highly explosive ambush.

From there on it is the good guys chasing the bad guys from one underground secret base to another to retrieve the weapons before they can be used, and set up the story for what could be an interesting sequel.

This movie has a surprisingly respectable cast that includes Christopher Eccleston, Sienna Miller, Dennis Quaid and Ray Park, but it really is just a big dumb action movie with cheesy, comicbook dialogue – with the occasional throwaway witty line.

It's not quite up to the excesses of Michael Bay, but it is not short on huge set pieces filled with explosions, martial arts and guns, lots of guns. Sommers is clearly at home directing these and the quality of the CGI has certainly improved a lot since he turned The Rock into a scorpion, although it's still not a patch on TRANSFORMERS.

There were scenes that had a familiar ring to them and reminded me of everything from STAR WARS to TEAM AMERICA – minus the philosophy and the humour, respectively. 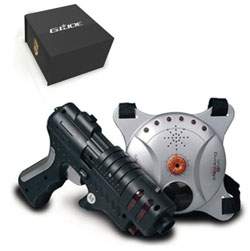 This movie actually made a stack of money when it came out in the cinemas, especially in the US, so it obviously has a huge audience, and with a 12 rating it is clear who that audience is. So if you are a 12-year-old boy and haven't seen this already then you are going to be in for a treat, and there is women fighting in tight leather to keep the dads interested.

The DVD extras are fairly standard studio "making-ofs" that show off the directors passion, if nothing else.

GI JOE: THE RISE OF COBRA is out on DVD and Blu-ray now from Paramount Home Entertainment and is available from Play and all good retailers.

To celebrate its release we have three copies of the movie on DVD along with a laser shock gun each. To be in the draw, click on the link below. The competition closes on December 30, 2009.