Download our current sponsor pack now! - we need your financial support to deliver the festival this year!

A POWERFUL PROMOTIONAL OPPORTUNITY FOR REACHING THE HIGHLY SOUGHT-AFTER 18-52 AUDIENCE... and more! 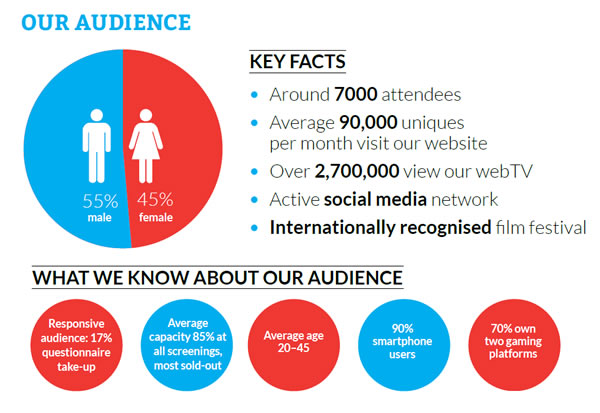 And this is just part of what we can offer you, lots of media attention, great audiences who trust us to show them cool new things, a vocal crowd of ABC1s with disposable income, a cool London event with international profile.

-----We are an internationally renowned independent film festival with a smart, affluent, vocal, cinema-going audience. Not a convention, not full of stalls selling toys and memorabilia, but a showcase for some of the best science fiction film from around the world...

The London International Festival of Science Fiction and Fantastic Film, or SCI–FI–LONDON, is one of the world’s leading genre festivals. It takes place annually in London in April/May, with a mini-festival in October and satellite events running throughout the year.

“SCI-FI-LONDON Film Festival is a significant contributor to London’s film cultural life. The strong audiences achieved by its screenings are a testament both to the city’s appetite for science fiction film and to the work the festival does in bringing new audiences to the genre.“ Film London

The festival is known for challenging narrow definitions of the genre (‘the science fiction film festival for people who don’t like science fiction’) and our dedicated team of staff volunteers ensures we deliver one of the friendliest festivals around.

SCI-FI-LONDON offers an unprecedented promotional opportunity for reaching loyal, enthusiastic, educated adult consumers. This powerful opportunity creates high visibility, not only among the festival’s large and sought-after audience but also through a targeted advertising campaign. We will work closely with your company to provide tailor-made options to suit your objectives and your budget, giving you maximum impact.

Below are a selection of our great supporters.

Our sponsorship and promotional opportunities include:

SCI-FI-LONDON is truly honoured by the high quality of its sponsors, partners and advertisers, many of whom have been involved with us since the beginning. For our most recent edition, we were able to count on the support of over 35 private company partner-sponsors and advertisers. After twelve successful years, tremendous media coverage and unparalleled contact with the 18–45 generation, more and more companies are linking themselves to us as sponsors and partners in order to positively and effectively reach our audience.

Sponsorship packages can be tailored to include:

Visibility of your marks