10+1 TO KEEP AN EYE AT BFI LONDON FILM FESTIVAL

The biggest and most celebrated film festival in London is finally back this month, and we would like to share some awesome movies to go and watch!

These films in specific belong to the cult strand, which displays works with exceptionally daring themes, strong images, and a particular fascination for sci-fi and horror. From a bleak and unsettling French horror, to a queer slasher set in the 1970s, or even to a surprising Nicolas Cage who fights alone against a cult in a bloody and visually breathtaking revenge movie, this year's festival seems to be screening some truly weird and wonderful works.

The list includes an array of international movies that all distinguish themselves for different reasons. Are you ready to explore and experience the most challenging and bizarre works of this festival and talk about them until next year? Then check out the programme, book those days off, and go watch all these crazy gems of horror and fantasy!

ALL THE GODS IN THE SKY 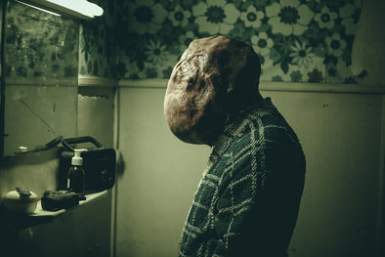 30-year-old factory worker Simon lives a solitary existence on a decrepit farm in the remote French countryside. Devoting his time to caring for his sister Estelle, who was left severely disabled when a childhood game went horribly wrong, Simon is plagued by guilt and depression. But he sees a way out, looking to otherworldly forces as a means of liberating both himself and his sister from the corporeal prisons in which they are confined. Expanded from his short film A Nearly Perfect Blue Sky, director Quarxx has crafted a visually breathtaking, emotionally challenging nightmare, filled with claustrophobic dread and horror. Yet beneath the brutal violence and mystifying surrealism lies a profound sense of sadness and unexpected empathy, making for a deeply disorienting experience. 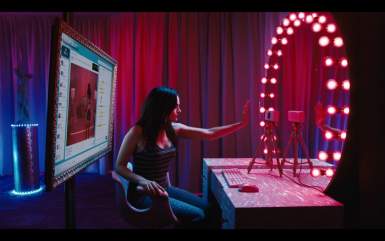 Ambitious camgirl Alice (known to fans as Lola) is desperate to hit number one in the chatroom charts and knock the main rival, enduring fan favourite Baby, off the coveted top spot. Inching slowly up the league tables with her increasingly outlandish and risqué shows, Alice’s hard work appears to be paying off. However, one day she finds herself unable to access her account and inexplicably discovers that Lola is still active online. But who is this mysterious virtual doppelgänger and how can Alice stop her? Collaborating closely with friend and former sex worker Isa Mazzei, Daniel Goldhaber’s whip-smart, impressively dextrous thrill ride skilfully sidesteps all-too-familiar moralising about the perils and supposed shame of sex work, instead offering up a refreshingly progressive critique on internet privacy and the commodification of the female body in a digital age.

Beneath the respectable façade of their privileged existence, affluent married couple Otavio and Gilda hide a very dark secret: a penchant for murdering and then eating their hired help. Their macabre fetish is one celebrated by the Cannibal Club, a secret society of like-minded elites run by powerful businessman Borges, of which Otavio is a long-standing member. But the tables dramatically turn when Gilda accidentally stumbles upon a secret about Borges, and the carnivorous couple suddenly finds themselves the hunted. A tasty mix of grisly horror, pitch-black comedy and biting political satire, Guto Parente (whose other film My Own Private Hell screened at this year’s BFI Flare) has prepared a dish of sex and violence so wickedly perverse, it might just put you off your dinner. 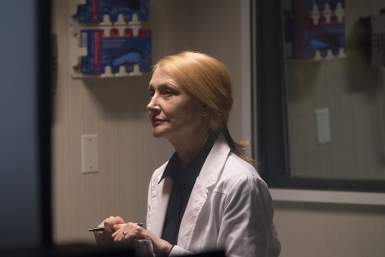 Eschewing the futuristic trappings we have come to expect of sci-fi cinema, Bill Oliver’s understated fantasy welcomes us instead to a familiar world of neatly furnished apartments, clean office spaces and bustling city streets. But within these recognisable spaces, something else is at play. Jonathan lives his life like clockwork. A part-time architectural draftsman, he goes through the same routines with unwavering regularity, including leaving a video message for an almost identical man named John (albeit a more relaxed, less buttoned up version), in which he details the banal events of his day. John in turn leaves messages too, and slowly the true nature of their relationship becomes clear. Featuring a brilliantly nuanced dual performance from a superb Ansel Elgort, Duplicate is a very different kind of genre film, intimate in scale yet boldly ambitious in its ideas. 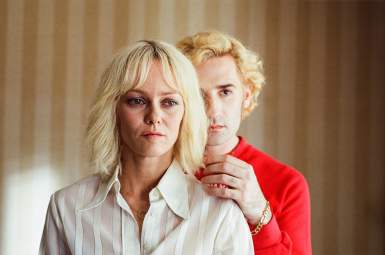 From the wild and twisted mind of visionary filmmaker Yann Gonzalez comes a kinky queer horror odyssey like no other. Vanessa Paradis plays Anne, a ruthless gay porn producer working in Paris in 1979. Nursing a serious broken heart following the dramatic breakdown of her relationship with girlfriend Lois, Anne launches herself into her latest and most ambitious film production. But as shooting gets underway, one of her stars is brutally murdered. Soon it becomes terrifyingly clear that a homicidal maniac is intent on bumping off the cast, one by one. Positively dripping with style and visual invention,Gonzalez’s libidinous delight comes steeped in playful genre references, owing as much to the opulent cinema of Dario Argento as it does the brash fetishism of William Friedkin’s Cruising. 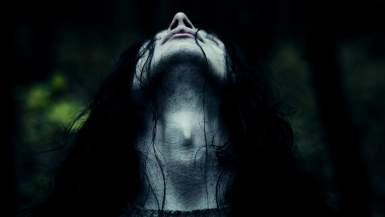 For black-clad nihilist Øystein Aarseth, aka Euronymous, the founding member of pioneering Norwegian black metal band Mayhem, making music simply isn’t enough. He wants to make a difference by spreading his mantra of chaos and suffering across Norway. But when his band face an unexpected tragedy, Euronymous’ megalomaniacal dreams appear to slip away. That is, until he meets Varg, an emotionally volatile superfan who becomes the group’s newest member and demands that Euronymous act on his vision and cause real havoc, with catastrophic results. Drawing inspiration from Michael Moynihan and Didrik Søderlind’s book Lords of Chaos: The Bloody Rise of the Satanic Metal underground, this bracingly unconventional biopic is every bit as raucous, energetic and offensive as its contentious subject matter deserves. 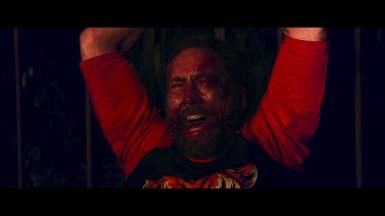 In a mountain-cabin idyll, lumberjack Red Miller (Nicolas Cage) lives in perfect harmony with his great love Mandy (Andrea Riseborough). But the couple’s blissful utopia is cruelly shattered when a ragtag band of Satanic cultists invade their humble abode and claim Mandy for their own. Traumatised and distraught, Red is left with no option but to exact a bloody revenge. Anyone who saw Panos Cosmatos’ extraordinary debut, Beyond the Black Rainbow, will know that describing his work is no mean feat. With Mandy, he has once again crafted a film so singular, perverse and beguiling, it’s almost impossible to define. Think of the most exquisitely nightmarish LSD trip imaginable, then multiply it by ten. That might give you some idea. Don’t just see Mandy. Experience it!

MAY THE DEVIL TAKE YOU

After years of estrangement, a young woman named Alfie reluctantly pays her dying father a long-overdue visit. With doctors unable to determine the inexplicable disease that has ravaged his body, Alfie and her stepsiblings head to their father’s dilapidated villa, determined to unearth any clues that could help them understand his grave condition. What they discover is far more bizarre than Alfie could have imagined, as the family find themselves at the mercy of a malevolent spirit. This no-holds-barred, wickedly humorous scare-fest from Headshot co-director Tjahjanto (he also directed instalments of V/H/S/2 and The ABCs of Death) boasts stunning set designs, eye-popping visual effects and more demonic action than you can shake a severed goat’s head at. What more could you ask for?

Stênio, a mortician’s assistant at a busy São Paulo hospital, makes a living tending to the dead. He also has a secret – a gift that allows him to communicate with the lifeless bodies he encounters. Privy to the grave secrets of many an ill-fated local gangster, Stênio learns of a shocking betrayal in his own life and uses information gained from the cadavers to take care of the problem. But he is unwise to abuse his uncanny gift, quickly learning it is best to let sleeping corpses lie. The debut feature from Dennison Ramalho (who wrote the most recent Coffin Joe entry Embodiment of Evil), The Nightshifter is a film as tricksy as its title would suggest – unafraid to defy expectations with its fluctuating tones and bold narrative sidesteps.

When Professor Capadis unexpectedly leaps to his death from a top-floor classroom window – to the horror of most students – six pupils glance on with chilly disregard. The budding sociopathic behaviour of this curious sextet only grows with the arrival of a new substitute teacher, Pierre Hoffman (Laurent Lafitte), who becomes increasingly obsessed with uncovering the mysteries he is witness to. But the closer Pierre comes to the truth, the more he begins to fear for his safety. Cleverly flirting with genre conventions, without ever truly becoming a horror film, Sébastien Marnier’s elusive and disquieting debut is as enigmatic as the creepy kids at its core. Impeccably performed and shot with careful precision, this is one of those films that truly gets under your skin and stays there. 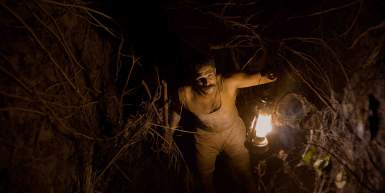 A truly scary horror film is a rare treat in South Asian cinema, but director Rahi Anil Barve delivers one, in some style, with this mythical cautionary tale. Vinayak is the conniving illegitimate son of a local landlord, living in the decrepit, ancient village of Tumbbad. Obsessed with unearthing a fabled ancestral treasure, he suspects that the secret lies with his great-grandmother, a cursed witch who has been trapped for centuries in a purgatory between life and death. Tricking her, he discovers the secret that will lead him to the riches, but also a voracious, otherworldly force. What begins as a cunning plan to steal a small fortune quickly spirals into a reckless obsession that finds Vinayak facing up to an unexpected and hair-raising reckoning.