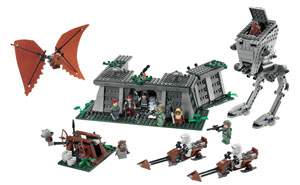 This year is the 10th anniversary of the partnership between LEGO and STAR WARS that has allowed children of all ages to not only recreate iconic scenes from the movies but also create their own scenes and stories with the great mini figs that are immediately identifiable with both brands.

Coming in box kits ranging from simple X-wing fighters up to the Millennium Falcon with over 5000 pieces. They proved so popular that by the end of last year they have sold over 106 million sets. They also generated a series of very popular videogames.

As part of the celebrations LEGO have released three new sets: The rebel assault on the Imperial bunker from RETURN OF THE JEDI with the Battle of Endor set (8038 £69.99 rrp).

From the original STAR WARS IV comes Darth Vader's TIE fighter (8017 £29.99) and from THE EMPIRE STRIKES BACK is Echo Base (7749 £19.99) featuring the first ever Taun Taun (probably more famous for its appearance in Robot Chicken Star Wars). These fantastic kits are available from www.lego.com and all good toy shops. 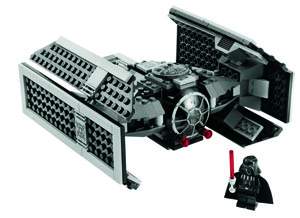 Thanks to LEGO we gave away one of each of these sets at the opening night of our Oktoberfest at the Royal Observatory, but we also have another five sets of Darth Vader's TIE fighter to give away here. Click on the link below to enter the competition, which closes on 14 November 2009.

And if you want to see what you can do with LEGO STAR WARS: