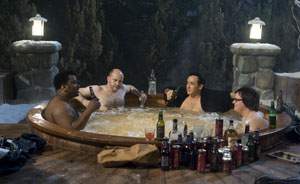 The Time Machine in the title piqued my interest, Hot Tub a little less, but in the interest of scientific impartiality I decided that anything to do with time travel was worthy of investigation.

What I found was a strange amalgamation of BACK TO THE FUTURE (complete with Crispin Glover) and Judd Apatow by way of John Hughes.

Of course, for hardcore sci-fi fans this film isn't going to pass muster. It does stick to the basic rules of fictional time travel, ie no messing with existing events and frequent discussions of the butterfly effect, but for the most part the time travel is a vehicle for a bit nostalgic '80s gross-out humour. 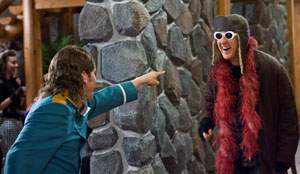 Directed by Steve Pink (screenwriter of GROSSE POINT BLANK and HIGH FIDELITY – hence the Cusack connection), the film is about three middle-aged men whose lives have reached a nadir.

Adam (Cusack) has just split with his long-term partner, who has taken almost everything from the house, and is left with his basement-dwelling nerdy nephew Jacob (Clark Duke from KICK ASS) and his friend Nick (Craig Robinson from The Office) is a hen-pecked ex-muso now working in a dog-grooming parlour have to take care of their other friend Lou (Rob Corrdry) who accidentally gets carbon monoxide poisoning in a drunken stupor.

They decide that the best thing to do is go to a ski resort they frequented in the '80s and try and recapture the decadence of their youth, but with the much younger Jacob in tow. When they arrive they discover the town is all but abandoned.

Checking into the hotel that was the scene of their last debauched time together, they discover that the hot tub outside their room is miraculously working, the get very drunk and wake up the next morning in 1986, with all its crimes against fashion.

What ensues is a hilarious romp to not alter time and get back to the present, but all done with the nagging doubt that the lives they are going back to are a bit shit, and they could actually make them better.

There are lots of pop culture references and a great running gag with Crispin Glover's character. If you like the Judd Apatow style of comedy, and aren't too hung-up on the thin sci-fi aspect, this is a great comedy with lots of heart, and more than its fair share of dick jokes, even if it does go in for a bit of mawkish sentimentality in the final act.

After all the thought-provoking indie sci-fi at last weekend's SCI-FI-LONDON festival, this could be just what you need for a bit of light relief.

HOT TUB TIME MACHINE is in cinemas from May 7. 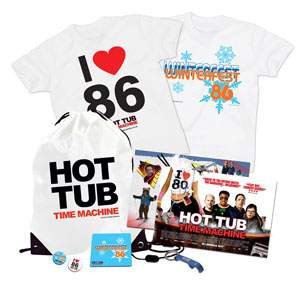 To celebrate the release of the HOT TUB TIME MACHINE we have five goodie bags to give away that include T-shirt, bottle opener, coaster and badges, courtesy of 20th Century Fox.