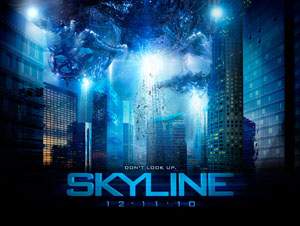 From the Brothers Strause, the effects team behind AVATAR, comes SKYLINE, in cinemas Friday, 12th November. After a late night party, a group of friends wake to an eerie blue light that attracts people like moths to a flame, sucking them skywards! The friends soon learn that an extraterrestrial force is swallowing the entire human population and that they must fight for their lives as the world unravels around them! The much-anticipated sci-fi thriller stars Eric Balfour, Scottie Thompson, David Zayas, Donald Faison, Brittany Daniel and Neil Hopkins. Remember, don’t look up!

To win the chance to be your own sci-fi hero for a day, SCI-FI-LONDON, in association with SKYLINE, wants to challenge you and three friends to an epic session at STAR COMMAND, London’s premiere Laser Tag centre at the Trocadero!

You’ll be transported to the future where you’ll join an elite special force team, receive your mission, gear up with the most technologically advanced equipment, and enter into the adventure of your lives as you battle for control of STAR COMMAND! It’s all located inside London’s famous Trocadero Centre in Piccadilly and with over 25 transport links is easily accessible.

To win the chance to take three friends to play STAR COMMAND, click on the link below to enter the competition.

1. SCI-FI-LONDON is the promoter of the competition.
2. The prize is valid until 24.12.210 and there is no cash alternative.
3. Only those over 16 can enter. Children under 6 cannot play Star Command.
4. All persons entering Star Command are admitted subject to the following /Star Command regulations. Any person who does not comply with these regulations may be removed from Star Command personnel or police officers. This is without prejudice to any claim that Star Command may have against such a person or persons arising out of their actions. Whilst inside Star Command all visitors must comply with any instructions given to them by Star Command personnel or police officers.
5. Star Command reserves the right, in its absolute discretion, to refuse admission to the Star Command, ban from entry to Star Command, or remove from Star Command without right to refund any person who:
-uses threatening, abusive or insulting words or behavior or in any way provokes or behaves in a manner which may provoke a breach of the peace;
-Is considered to be under the influence of illegal substances or alcohol or does not follow health and safety rules given by the marshal.