The Adjustment Bureau. Win a Blu-ray 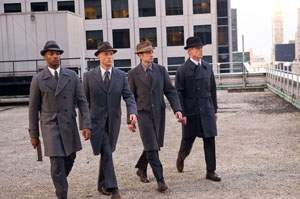 There is quite a lot of correlation between science fiction and religion. It's as if the authors are finding the mysteries of the universe and expressing them through the medium of speculative science and fantasy.

Stranger in a Strange Land and Dune are two prime examples from classic sci-fi literature with strong religious overtones, George Lucas's Jedis were channelling cosmic energies, Battlestar Galactica was overtly about the ongoing conflict between monotheism and polytheism.

L Ron Hubbard realised he could make more money from theology than from sci-fi, so he mixed them both, gave it one of those hybrid names favoured by modern marketing types, enrolled gullible Hollywood types and the rest is history.

Another US eccentric, Philip K Dick, didn't go quite as far, but he did hold his own religious views, which he expressed in works such as Valis and Radio Free Albemuth (film version showed at SFL9). THE ADJUSTMENT BUREAU, the latest adaptation from a Dick short story, addresses many of the issues that face the enquiring mind: do we control our own destiny; is there such thing as free will; is there someone looking out for us? 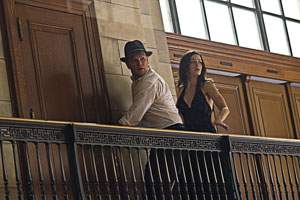 These are all questions plaguing David Norris (Matt Damon), a young, ambitious US Senator. He is poised to win the election, when he meets vivacious ballet dancer Elise Sellas (Emily Blunt) under unusual circumstances.

When they accidentally meet again, events begin to conspire against them as they are pursued by a group of men in sharp suits and dapper hats. It is the job of these men to keep the couple apart but despite their best efforts, it doesn't seem to be going according to plan. But which plan is the right one?

This film is another case of the romantic angle being played up and the sci-fi played down – at least in the marketing campaign. The film actually manages to get a good balance of the two genres, mainly thanks to the two leads, who are totally convincing as a couple.

The gentlemen of The Adjustment Bureau may come across as very efficient and correct, but they make mistakes like everyone else (or are they really not mistakes but part of the bigger plan?).

This presents the viewer with a whole different set of conundrums and paradoxes that you don't get from time travel because they have more grounding in reality. Do we ever really know where our lives would have taken us if we had taken a left turning one morning, or a right?

Or if even the simple act of spilling a cup of coffee could have totally changed the course of your life? It also helps that the actors who portray the main agents (Anthony Mackie, John Slattery and Terence Stamp) can give some humanity to the calculating precision of their job. 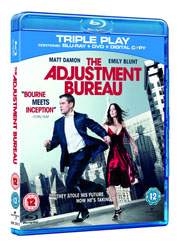 Forget about INCEPTION, if you want intelligent, mind-boggling sci-fi, but with a heart, then this is the one. It might not have the same tricksy effects as INCEPTION, but it has one of the best door-related chase scenes since MONSTERS INC. And you will probably never look at men in hats the same way again.

The DVD release comes with some interesting, but not spectacular, special features such as a map of New York and the usual behind-the scenes docs and deleted scenes.

THE ADJUSTMENT BUREAU is out on DVD and Blu-ray from July 4 and can be ordered from Play and all good retailers.