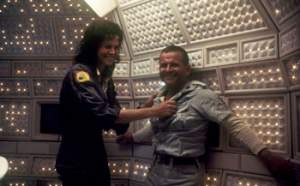 Alien is without doubt one of the most iconic sci-fi films of all time. Not only did it establish horror as a viable sub-genre but also introduced an equally iconic monster/villain and a ballsy heroine. Ridley Scott’s original went on to generate three sequels, all by visionary directors, some dodgy vs Predator movies based on the better comic books. Alien also has the distinction of reintroducing the nonce word quadrilogy into modern usage (the correct word is tetralogy) for the variously packaged DVD box sets of the movies. These box sets came with hours upon hours of special features, but who actually watches the photo galleries and storyboards on screen? Where these work best is on a printed page, and now we have the perfect companion to the box sets in Alien Vault, a fantastic coffee table book by Empire Magazine editor Ian Nathan.

This isn’t some flimsy paperback “making-of” that sometimes get released as part of the studios marketing campaign. This is a proper book that is almost a work of art in itself. Inside the sturdy slipcase is a solid hardback book filled with well-researched stories, illustrations, HR Giger’s concept artwork, the director’s annotated storyboards, Polaroids and script pages. Scattered throughout the book are vellum envelopes containing reproductions of artefacts such as plans for the Nostromo. This is a magnificent record of a classic genre film crafted in the days before CGI. 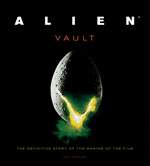 Anyone who thinks print is dead should get their hands on this book. It is possibly only matched by The Art of The Matrix as a record of the art of making of fantastic cinema.

Alien Vault is published by Aurum Press on September 8 and is available from Play for £17.99 delivered (£30 rrp).

We have two copies of this amazing book to give away. Click on the link below to enter the competition.