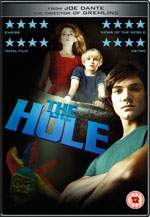 Joe Dante is a smart filmmaker. Not only is he a good director, but also clever enough to make films in the most popular of genres and make them appeal to kids and adults alike. He already had some horror hits with Piranha and The Howling, but it was Gremlins that really put him on the map with its combination of cute and scary, that preyed on the viewer's fear of everyday objects and occurrences. Well, he's done it again with The Hole.

This is described as a teen horror film, the problem is it takes a lot to scare teenagers these days. Most of them seem to have TVs in their bedrooms so are used to watching disturbing images - Buffy, Supernatural, Eastenders – so it takes a fair bit to make them jump, although, from my sample group of one teenage daughter this did a pretty good job. 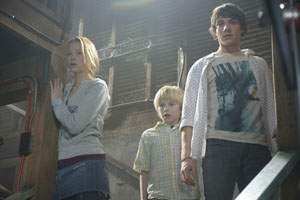 As is more and more the norm in movies as in life, it focuses on a single parent family. This time it is a mum (Teri Polo) and her two sons Dane (Chris Massoglia) and Lucas (Nathan Gamble) who have just moved from New York to a small town called Bensonville. As the two boys explore the house they find a heavily padlocked door in the floor of the basement, which they naturally have to open, only to discover it contains a bottomless pit.

Of course, rather than immediately locking it up again, curiosity gets the better of them and weird stuff starts to happen. First an evil looking clown puppet starts to antagonise Lucas, the annoying little brother.

When Julie (Haley Bennet), the cute teenage girl next door comes over, a strange ghost-like girl starts to appear at inopportune moments, and it soon becomes clear to the trio that there is something evil lurking in the hole.

The scares are pretty obvious and often signposted with music, but they do work well even if they seem to have come from a cross between early episodes of Buffy and classic adult horror. The film's conceit is pretty obvious, especially if you've seen Sphere.

It was originally screened in cinemas in 3D, and it was easy to see where the "3D" moments would have been, but it still works well (if not better) in 2D. The DVD/Blu-ray comes with a couple of Making-of/Behind-the-scenes features, but they weren't on the preview disc.

THE HOLE is released on DVD and Blu-ray on January 17 and is available from Play and all good retailers.

We have three DVD goodie bags to give away, to enter the competition, click on the link below.