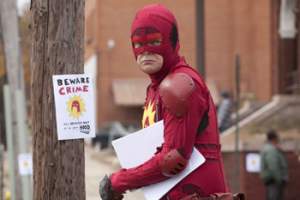 We have been subjected to an almost overwhelming number of superhero and comic book movies in recent years (and weeks for that matter), with some being better than others.

Most of them inhabit a parallel world where people have super powers and spend most of their fighting evil people who also have super powers. Of course, there are exceptions, such as Batman and Iron Man, whose powers are derived from immense wealth.

Interestingly, those two heroes turned out to be cinema's most popular. It is only natural that writers, with what could be described as cynical leaning, would want to explore "super" heroes that have neither super nor financial powers. 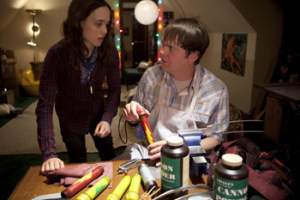 Films such as Mystery Men, Kick Ass and the little-known and underrated Woody Harrelson film Defendor, have all addressed the idea of ordinary people trying to be superheroes.

Where Mystery Men and Kick Ass are firmly based in a heighten fantasy world, Defendor and Super are from a much harsher and darker reality, where the heroes are damaged goods. In the case of Super, Frank (Rainn Wilson) has been abandoned by his ex-junkie wife (Liv Tyler) for a local drug boss – another fine villainous role from Kevin Bacon.

Distraught, he is inspired to become the Crimson Bolt and fight local street crime, with a homemade suit and a big spanner. He is soon joined off-kilter comic shop assistant Libby (Ellen Page), who wants to be his assistant Boltie. Together they plan to take on the drug gang and rescue Frank’s wife.

This is a darker film than Kick Ass, which is hardly surprising as director James Gunn is an alumnus/escapee from Troma (the home of The Toxic Avenger), and some of the influences show, including a Stan Lee like cameo from Troma supremo Lloyd Kaufman.

Gunn is clearly well connected because there are lots of cameos including Nathan Fillion, and William Katt, who starred in the ’80s TV series The Greatest American Hero. Strangely, Super has been given an 18 rating, while Kick Ass, which contains more extreme violence and swearing, got a 15. However, it has to be said that Super is more grown-up film in its approach, and its lead. 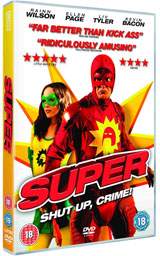 If you missed Super at SFL10 or on its limited cinema release, then definitely get in on DVD. It's worthy of repeat viewings and cult status.

SUPER is out on DVD/Blu-ray now and available from Play and all good retailers.

Want to win a copy of the film on DVD? Click on the link below.