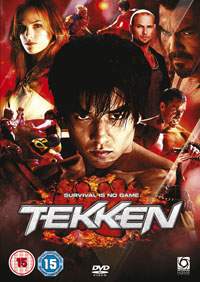 Based on the hugely popular video game franchise, TEKKEN arrives on DVD, Blu-ray and EST courtesy of Optimum Home Entertainment. Starring Luke Goss (Blade II, Hellboy II: The Golden Army, Death Race 2) and featuring some of the biggest stars of the fight scene including Gary Daniels (The Expendables, Fist of the North Star), Cary-Hiroyuki-Tagawa (Kick Boxer II, Mortal Kombat) and American UFC star Roger Huerta, TEKKEN is the first live-action movie to be based on the Namco-Bandai video games. Featuring bone-crunching action sequences and incredible displays of martial artistry, TEKKEN is the film that fans of the series have been crying out for!

Directed by Dwight Little (Murder at 1600, TV’s Prison Break), TEKKEN focuses on Steve Fox (Goss), a young man with a mysterious power that his enemies will stop at nothing to get their hands on and a burning desire to avenge his mother’s brutal murder. Upon discovering his grandfather is the legendary fighter Heihachi Mishima, Fox pleads to be trained by him before entering the deadly ‘King of the Iron Fist’ competition where he is finally given the chance to take revenge on his enemies and protect his heritage.

TEKKEN is out now on DVD and Blu-Ray and is available from Play and all good retailers.

We have three copies of the film on DVD and Blu-ray to give away. Click on the link below to enter the competition. Please specify which format you want.