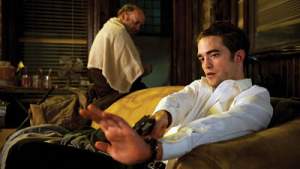 David Cronenberg is definitely one of the great science fiction filmmakers, even if he is occupying his own little dark corner of the genre, one that not many wish to visit.

And yet he has adapted the works of some of the literary greats (Burrough's Naked Lunch, Ballard's Crash), which, along with his earlier classics Scanners and Videodrome, and the oft underrated eXistenZ, all highlight his unique cinematic vision.

Although his last two films (Eastern Promises, A Dangerous Method) were slightly more traditional dramas, Cosmopolis sees him return to the left field with his adaptation of the novel by Tom DeLillo.

Although DeLillo's 2003 novel is hardly prophetic, as the corporate world has been going into various stages of meltdown for for quite some time, it is certainly topical and somewhat representative of the excesses of the infamous 1% (and their progeny).

British actor Robert Pattinson takes the lead role as Eric Packer (not related to the other Aussie media mogul, Kerry). Given his status as a teen idol following roles in Twilight and Harry Potter, he was an interesting choice.

But his aloofness and boyish good looks certainly make him right for the part, and while the film not appeal to his legions of fans, it is a smart choice by the actor to show that he is much better at his job than the roles he is famed for would indicate.

His role as Salvador Dali in the little-seen Little Ashes, was certainly an eye-opener. As with Zac Efron, he should soon be able to outgrow his teenage audience. Pattinson is supported by a great cast that includes Paul Giamatti, Juliette Binoche, Samantha Morton, Kevin Durand and Jay Baruchel. 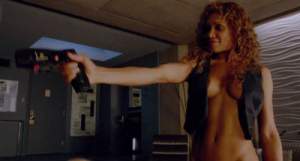 What is interesting about the movie is it is not nearly as intense as the trailer suggests. All the promised sex and violence is what is in the trailer, while the rest of the film is filled with copious amounts of dialogue about the banal stuff that haunts the ultra rich and never really concerns the more plebeian masses.

At one point, Packer (seriously) asks, "What happens to all the stretch limos at night?", which is actually answered in a manner Cronenberg would be impressed by in the film Holy Motors, which, coincidentally, also screened at this year's Cannes film festival, and would make a fantastic double bill of existential weirdness, although Cosmopolis does address questions of our places in society with its long monologues, better than Holy Motors does.

While it is not classic Cronenberg, for fans of his more signature work will welcome this return to more imaginative realms. However, for anyone interested in filmmaking, the DVD/Blu-ray are worth buying for the making of feature alone.

Cronenberg is an eloquent and consummate filmmaker, who is far more down to earth than his films suggest, and watching and listening to him speak about his working processes is truly a masterclass in filmmaking.

Cosmopolis is out now on DVD and Blu-ray. We have two copies to give away on DVD. Click on the link below to enter the competition.