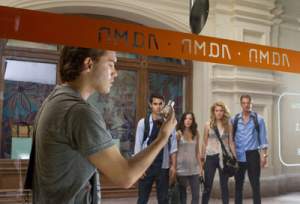 When The Darkest Hour had its cinema release it was burdened with one and two star reviews, primarily because of its lack of press screenings, apart from the obligatory National Press showing, which is generally left to the old-school critics who regard science fiction with a certain disdain.

Of course there are exceptions, but for sci-fi that edges into the indie and pulp end of the genre it needs the eyes of the fans to give balance to reviews. Needless to say, The Darkest Hour’s cinema run was short, but its Blu-ray/DVD release is a chance for reappraisal.

This a US/Russian co-production (justified by a slightly flimsy plot device) produced by Timur Bekmambetov (Night Watch, Wanted) and directed by Chris Gorak, who made the tense indie thriller Right at Your Door. Gorak comes from an art direction/production design background, and Bekmambetov’s films have always had stunning visual effects, with Night Watch putting new Russian movies, and Bekmambetov, on the international map.

With that pedigree it’s not surprising that The Darkest Hour features a power house of effects, unfortunately it is a reasonable story let down with fairly thin screenplay. 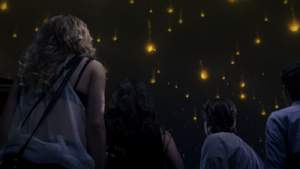 Sean (Emile Hirsch) and Ben (Max Minghella) arrive in Moscow to launch their latest social networking software, but things don’t exactly go as planned. They head out to a nightclub where they meet Natalie (Olivia Thirlby) and Anne (Rachael Taylor).

When the power goes out, they head out into the streets and see spectacular lights falling from the sky (they clearly had not heard of Day of the Triffids) and before long it is obvious it is an alien invasion.

This is basically a chase/survival movie, in a similar vein to Cloverfield, although the aliens are invisible, quasi-indestructible power-suckers that can disintegrate humans with a touch. 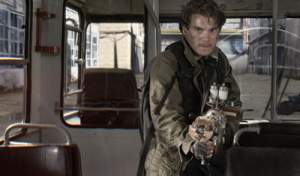 As with 28 Days Later and I Am Legend, there is something fascinating seeing an empty major world capital, even if it is just for the “how did they do that?” factor.

Although it is hampered by cliched dialogue, a lack of real character development and some moments that don’t withstand much scrutiny, there is enough effects-driven action and suspense to keep viewers engaged, and an open ending that could make way for a sequel or even a TV series.

The Darkest Hour is out onDVD and 3D Blu-ray (with 2D Blu-ray, DVD and digital copy included) on 21 May and available to order from Play and all good retailers.

We have five copies to give away on DVD. Click on the link below to enter the competition.