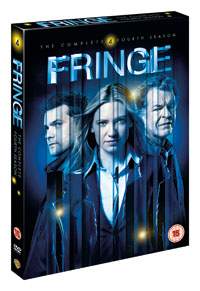 When Fringe first hit the airwaves, it was compared with The X-Files, mainly because of its covert FBI division investigating paranormal activity. However, as it developed, it was clear that it was taking its own unique direction as it headed off into the separate realities of parallel worlds, of which Peter Bishop was a vital key, especially at the end of Season 3.

Come Season 4 and no one remembers who Peter is, thanks to the Observers trying to fix a mistake they made, but Peter he keeps popping up in the memories of Olivia and Walter, which is driving them a bit crazy, or in Walter's case, crazier. Although the show isn't specifically about Walter, he is the best reason to watch it, and in this season he is more fragile, but still as eccentric as ever, with John Noble giving a fantastic performance of the whacky professor in every episode.

Unlike previous seasons, this fourth one is more about the ongoing story rather than case-of-the-week, and there as plenty going on as the possibility of the worlds really colliding is becoming more of a reality.

This is smarter than average sci-fi, and the Blu-ray release features real scientists discussing the ideas on the show. There is also a digital comic called Beyond the Fringe (nothing to do with the 1960s' groundbreaking BBC comedy show with Peter Cook & Dudley Moore), that fills in some of the background stories.

Fringe: The Complete Fourth Season is out now on DVD and Blu-ray.

We have 3 copies to give away on Blu-ray. Click on the link below to enter.