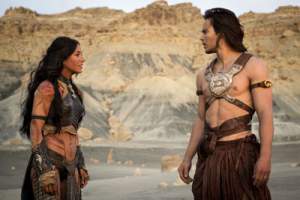 The Victorian era must have been an exciting time to live in (if you weren’t poor, of course) as the innovations in practical science took massive leaps, with Nikola Tesla leading the pack by a mile. Not only were his ideas decades ahead of his nearest rival Thomas Edison, but his vision of a better world was thwarted by greedy capitalists.

Whilst experimenting with radio waves, Tesla became convinced that there was life on Mars (which makes it fitting that David Bowie should play him in The Prestige, despite the height discrepancy).

Tesla was not alone in his belief in life on Mars and that pervasive idea must have had some influence on Edgar Rice Burroughs, the dissatisfied stationery store clerk who started writing pulp fiction stories about the red planet, which he called Barsoom, and his first book about John Carter, the earth hero teleported (another idea Tesla was working on) to Mars was published in 1912.

A hundred years on and those adventures finally made it to the big screen courtesy of Disney and staff from their major shareholder, Pixar.

Andrew Stanton, who made Pixar’s sci-fi hit WALL-E amongst others, has brought John Carter to life in a solid origins story that successfully mashes two great genres together – sci-fi and western – to make a movie that invokes the excitement of the original Star Wars. A cracking space adventure filled with action, spectacle, romance, a good share of the humour that Pixar films are renowned for, as well as just the right amount of pathos.

There is no attempt to apologise for the scientific inaccuracies of the Martian landscape and atmosphere, as we are expected to totally suspend disbelief after the gruelling, post Civil War intro where we are introduced to the renegade Carter before his transportation to the alien terrain (Utah with some CGI enhancements) of Barsoom. Appropriately for a planet named after the god of war, there was plenty of turmoil between rival factions that are being manipulated by higher sentient beings under the leadership of the current go-to guy for that type of character, Mark Strong, almost reprising his Green Lantern role, but with more subtle powers.

For fans of old-school fantasy sci-fi there is plenty to enjoy about this movie, with touches of the quasi-religious Dune about it.

The CG settings and characters are extremely realistic and seamless against the actual locations, and look so much better better in 2D than they did in the theatrical 3D release. The acting is just right and the two heroes make a good account of themselves in the action scenes as well as the more dramatic, and romantic, moments, as well as being easy on the eye.

It was somewhat upsetting to read the drubbing this film got in the media after its cinema release. Firstly from ill-informed, so-called critics who kept calling it derivative and comparing it with Star Wars and Avatar, two of the world's biggest sci-fi blockbusters whose creators were influenced and inspired by Burroughs' original stories, along with countless other sci-fi writers over the decades.

After having put off audiences with their bad (as well as badly researched) reviews they then took pleasure in gloating over the film's box office failure, labelling it the biggest box office flop in cinema history. The trouble with such accusations is that Hollywood accounting is somewhat flexible and more to do with column inches than balancing columns of figures.

In fact, there is more imagination used in the accounting than many of the studios use in the making of their films.

So, don't believe everything you read in the press (ever). This is a fantastic, fun film that has something for everyone and remains faithful to its pulp fiction origins, while appealing to people brought up in the CGI action, blockbuster age.

As with many other films that opened to bad reviews (such as Blade Runner) this film will find its audience and will get the recognition it truly deserves in years to come, or hopefully sooner with this DVD release. 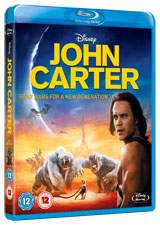 The Blu-ray/DVD is filled with extras and behind-the-scenes features that show the passion, enthusiasm and fun that went into making this movie.

We have three copies of John Carter to give away on Blu-ray. Click on the link below to be in with a chance to win one.