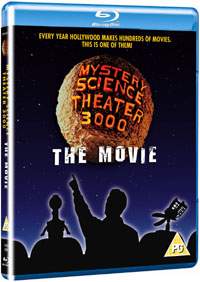 Anyone who has attended our infamous festival allnighters will be more than familiar the letters MST3K, the abbreviation for Mystery Science Theatre 3000.

Now, the makers of this fantastic comedy series have made a feature film, which is out on Blu-ray and DVD from June 11.

Mad scientist, Dr Clayton Forrester has concocted a diabolical scheme for world domination, to subject the human race to the worst movies ever made.

However, Dr Forrester gets more than he bargained for as his test subject possesses mankind’s ultimate defence: a sense of humour. As the film plays they mercilessly heckle, providing a hilarious running commentary and a way to foil his evil plan.

Bonus features include: Making of, Trailer and stills gallery.

We have five copies to give away on Blu-ray. Click on the link below to enter the competition.