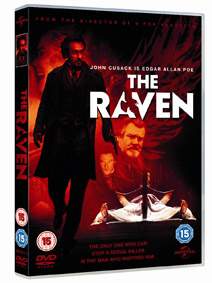 When a mother and daughter are found brutally murdered in 19th century Baltimore, detective Emmett Fields makes a startling discovery. The crime resembles a fictional murder described in gory detail in the local newspaper as part of a collection of stories penned by struggling writer and social pariah Edgar Allan Poe.

As Fields recognises elements of the crime from Poe’s story The Murders in the Rue Morgue, he becomes convinced there is a link and so recruits Poe himself to help with the investigation.

As another gruesome murder occurs, which is also inspired by a popular Poe story, Poe soon realises his work is being used as inspiration for the brutal killings.

His love, Emily (Alice Eve) soon becomes a target which calls for the inventor of the detective story to use his own powers of deduction to try and solve the case. It’s a race against time to save her life... will he be too late?

If you enjoyed the chills and suspense of Se7en or Sleepy Hollow – The Raven is a must-see! The Raven is released on DVD and Blu-ray courtesy of Universal Pictures (UK) and available for legal download and via video-on-demand now.

To win one of five copies we have to give away, click on the link below.