Sound of my Voice 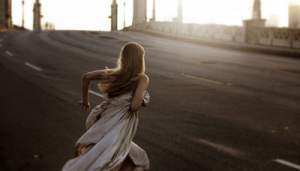 There seems to be an inextricable link between religion, science fiction and conspiracy theories, possibly because they all demand a certain amount of belief and pose hypothetical questions that cannot easily be proved, denied or answered.

By religions, I'm not talking about the teachings of the assorted prophets and incarnations, but the various cults and sects that have resulted from people's interpretations of those teachings, or those that have been set up by people inventing their own belief systems, for fun and profit.

These sects don't even have to be based on a belief in a divine presence, with many originating from a belief in extra terrestrials, while others are simply based on the self-aggrandisement of charismatic, deluded egomaniacs. Whatever the origins, they can all make for interesting stories and movies.

PT Anderson's Oscar-baiting The Master, tells of one such story, which bears an uncanny resemblance to the biography of certain science-fiction writer turned "religious" leader with a penchant for rich Hollywood types. 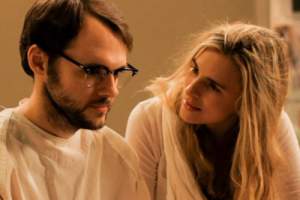 This is a big budget movie, shot on 70mm film and featuring a stellar cast that includes Philip Seymour Hoffman, Joaquin Phoenix and Amy Adams.

However, it's brilliant cinematography and acting are somewhat let down by less interesting story.

Sound of my Voice, on the other hand, is a low-budget indie co-written and starring Brit Marling (Another Planet) as Maggie, a woman (allegedly) from the future who has built a secret following around herself as she teaches her disciples how to prepare for a forthcoming disaster.

The story is told from the point of view of Peter and Lorna, a couple of wannabe documentarians who want to infiltrate the cult with a hidden camera and expose the leader as a fraud.

Thankfully the film avoided using the "found footage" format, which is increasingly popular at the moment, such as the recently released cop drama End of Watch, and done with varying degrees of artistic and financial success. 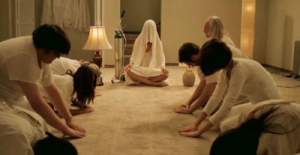 The film's success is definitely down to Marling, although more for her screen presence than her writing. Her good looks and haunting/haunted portrayal of the object of adoration is totally convincing, and it is easy to see why some people would believe what she says, and the writing supports it.

Where the film falls down is some aspects that are never properly elucidated. Not spoon feeding the audience is a good thing, but pulling the spoon away just as you are about to eat can be annoying. On more than one occasion we are shown things that a clearly important.

I trust that Marling is smart enough a writer not to give undue attention to things that are irrelevant and therefore confusing, and most of this occurs in the final act, with the final sequence being particularly frustrating. On the one hand there is a great twist/reveal, then on the other there are too many questions left unanswered.

Marling's other film, Another Earth, suffered from a similar problem. It created interesting characters and dramas for them, but for a science fiction film the science aspect was questionable, undermining the rest of the story. With time travel wholly in the realms of speculative science (conspiracy theories aside), it does mean it is simply a "what if" scenario, but one that will be heavily scrutinised by a nerdy sci-fi audience, or leave a mainstream audience completely baffled. 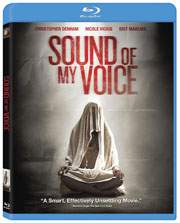 As a well-acted cautionary tale it is engaging and well executed, which shows Marling is definitely a talent to watch out for, but it is the writing, or possibly the editing, that let it down in the home stretch, and not because it is overly enigmatic.

Sound of my Voice is out now on DVD and Blu-ray.

We have two copies to give away on Blu-ray. Click on the link below to enter the competition.