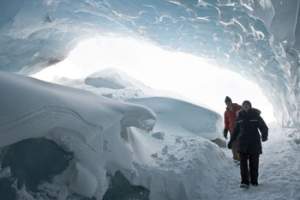 Remakes, reimaginings, or whatever you want to call them, have had some pretty bad press in recent years (except Battlestar Galactica), and justifiably so. They do little for a filmmaker’s credibility and are mostly seen as commercial opportunism by the producers and studios who back them.

Some filmmakers have tried to circumvent this, and the equally reviled sequels, by taking a movie and making a prequel, something that was done with great success with The Rise of the Planet of the Apes. However, let’s face it, no matter how good they are, they are not really much more than big-budget fan fiction.

This new version of John Carpenter’s seminal film The Thing, opts for the prequel route, and like sequels it is basically more of the same, just not as well done despite the advances in technology and visual effects, or in this case, because of those advances.

Where Carpenter’s film relied as much on what you didn’t see as what you did, this goes for the big visual effects that, for the most part, not only don’t scare but verge on the laughable. (Although, watching the behind the scenes on the DVD does make you view the effects in a slightly new light.) That’s not to say there aren’t some tense moments, but these come from the time-honoured method of what you don’t see.

Although this is a prelude to the 1982 film and remains faithful to that film, often explaining some of the events in the original, it does feel more like an Alien movie – with touches of AVP, due to the alien spaceship buried under the Antarctic – due to the presence of paleontologist Kate Lloyd (Mary Elizabeth Winstead), who takes on the Ripley role, and although she lacks Sigourney Weaver’s presence, she still manages to be a force to be reckoned with, but from a nerdy science viewpoint rather than a military one.

Of course there is a whole coterie of male archetypes and stereotypes to act as creature fodder, and play into the mostly signposted paranoia and conflicts.

This may not have the iconic stature of Carpenter’s film, but the story and performances are credible enough, even if the science doesn’t withstand too much scrutiny, so it is advisable to leave your brain at the door and simply enjoy the action. With both versions available on special box-set releases it is up to you to contrast and compare and make your own decisions. 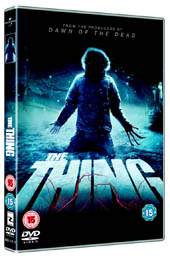 The Thing is out on DVD and Blu-ray in single and two-disc versions from March 26 and can be ordered from Play and all good retailers.

We have five copies of the film on DVD to give away. Click on the link below to enter the competition.