After an alien invasion, a band of survivors prepare to fight back against the aggressive extra-terrestrials on the outskirts of Boston. Watch the revolution unfold with Steven Spielberg’s spectacular sci-fi drama Falling Skies, available on DVD from 2 July.

Each day is a test of survival as citizen soldiers work to protect the people in their care while also engaging in an insurgency campaign against the occupying alien force, whose nature and purpose remains a mystery. 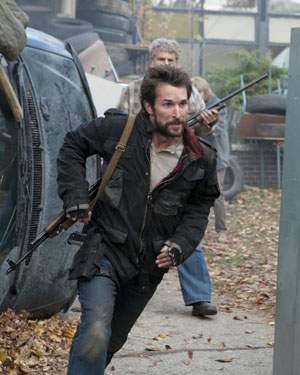 At the centre of Falling Skie is Tom Mason (Noah Wyle, who played the other John Carter, in E.R. as well as Steve Jobs in TV movie), a history professor whose family has been torn apart. His wife was killed shortly after the initial attack, and one of his three sons has been taken captive by the aliens for some unknown purpose.

Tom must now put his extensive knowledge of military history to the test as second in command of the 2nd Massachusetts, a regiment of resistance fighters protecting a large group of civilian survivors. They are constantly trying to gain intelligence about the aliens in order to one day outsmart and overtake them and hopefully rebuild their lives.

As with all good sci-fi TV, which is the best place for it to allow the time and space for the scope of the ideas to properly develop, this show is both episodic and with a series-based story arc - i.e. to destroy the aliens. The show has a good supporting cast of seasoned survivors including Moon Bloodgood (Terminator Salvation) and Will Patton (Armageddon), that help to add the human touch to the story.

However, having Spielberg's name attached does mean that at times it does fall into that homesy family sentimentality and patriotic fervour that Americans seem to love and that is somewhat alien to British viewers, but there is still plenty of gritty action to keep it interesting, and there is always a cliffhanger ending to an episode that keeps you wanting to watch another one.

This is why shows like this are best watched on DVD, so as to avoid the frustration of waiting a week to find out what happens.

Thankfully the show has a second season, which is showing now in the States, so now is the time to get up to speed with the show, if you missed it when it aired, before it is broadcast here. 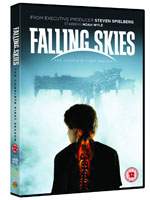 To celebrate the release of Falling Skies, we’re giving you the chance to win your very own copy of the box set. To be in with a chance of winning, just click on the link below and answer a simple question.