Win Star Trek: The Next Generation S2 on Blu-ray 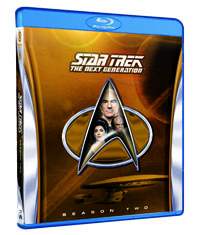 It's something of a good week for Star Trek fans. The first still has been revealed and footage from the new movie is being shown to select press and fans this Friday (of course we will be there). It's also seen the Blu-ray release of the second season of STAR TREK: THE NEXT GENERATION on Monday, as the journey to new frontiers continues in spectacular high definition from CBS Home Entertainment and Paramount Home Media Distribution.

Adding to the exclusivity and collectability of the Blu-ray release is an HD, “Extended Cut” of “The Measure of a Man,” which includes deleted scenes and different angles from the broadcast version. The original version of the episode is included, as well as a “Hybrid Extended Cut,” combining the high-definition on-air version of “The Measure of a Man” with video of the extra material taken from an early VHS rough-cut of the episode that was in the writer’s (Melinda Snodgrass) archives.

STAR TREK: THE NEXT GENERATION – THE SECOND SEASON also features over 120 minutes of brand-new special features, including a two-part, in-depth documentary on the making of Season 2 entitled “Making It So: Continuing Star Trek: The Next Generation” – Strange New Worlds (Part 1), and New Life and New Civilizations (Part 2), and a gag reel that was created from newly recovered 35mm film elements and transferred for the very first time to high-definition.

The 5-disc collection features all 22 episodes of the second season of STAR TREK: THE NEXT GENERATION, including the beginning of Whoopi Goldberg’s notable recurring role, and the introductions of Diana Muldaur as the new ship’s doctor, and the deadly alien villains The Borg.

Order your copy from Amazon and all good retailers.

We have two copies of this five-disc set to give away. Click on the link below to enter the competition.