At the end of Season 1, Tom Mason (Noah Wyle), the history professor who becomes de facto figurehead of the 2nd Mass(achusetts) resistance, was seen entering the alien spaceship, Close Encounters style - hardly surprising as Spielberg is Exec Producer of the show.

Season 2 begins three months later and Tom's two eldest sons, along with the rest of the 2nd Mass are continuing their battle against the aliens, although their ranks have been decimated. However, Tom arrives in the middle of an attack, which immediately causes a shift in the group dynamic, and it's not long before loyalties are brought into question. 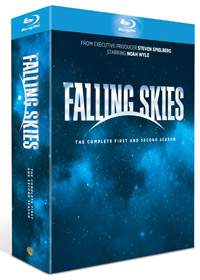 As with any of the countless post-apocalyptic/alien-invasion series and movies that are out at the moment, there are many aspects of the science and logic that doesn't stand up to scrutiny, but why should those get in the way of good drama? And this is good drama that gets packed into just 10 episodes, which is short for an American series.

If you were a fan of the first season there is plenty of intrigue to keep you engrossed, and if you haven't seen it yet it is definitely worth getting the box-set with both seasons to give it a look.

The third season has already aired in the US, and there is a preview of it on the DVDs, and it looks like there will be a fourth season.

Falling Skies Season 2 is out now on DVD and Blu-ray as are box sets of the first two seasons.

We have three Blu-ray box sets of Seasons 1 and 2 to give away. Click on the link below to enter the competition.