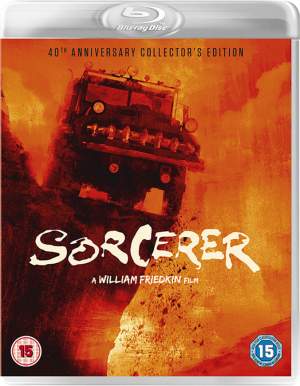 Then came his multi Oscar-winning film The Exorcist.

Director William Friedkin was on a hot ticket in 1973 and his next project, Sorcerer, was sure to be a gold-plated, box-office smash...

But there’s a problem: you’ve never heard of it...

Most likely because it was a box-office disaster, barely recouping its budget while getting hammered by the critics.

But like many films which are critically lynched at their release, Sorcerer has risen like the proverbial phoenix and is now widely considered a cult classic - Stephen King ranks it as his favourite film of all time.

The film follows four men, all on the lam for various reasons, as they try to buy their way out of exile in Latin America by transporting crates of highly unstable dynamite in trucks that would fail an agricultural MOT.
What follows are some of the most nerve-shreddingly tense scenes ever committed to celluloid. In an era before CGI, the mind boggles at the stunts that Sorcerer achieves.
From city-centre explosions to rope bridge crossings over swollen rivers, there’s barely a moment’s respite, which is all for the better in an age where special effects remove us from the action far too often.

And why the hell is it called Sorcerer? You’ll have to watch to find out.

Sorcerer is out now on a feature-packed Blu-Ray and we've got 3 copies to give away to lucky winners.