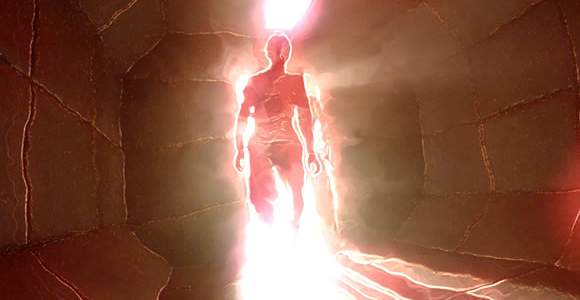 OVERHEAD LIGHT
Dir: Christopher Arcella, 2016, English, 5mins, USA
Everyone is stuck in a device these days being social! A young woman blessed with an immunity to the virus of social media seeks a real connection.

I AM THE DOORWAY
Dir: Robin Kasparik, 2017, English, 15mins, CZECH REPUBLIC
Based on the story by Stephen King.  This is a first person perspective film that gets inside the head of an astronaut trapped in a spaceship, as a strange virus grows inside him, altering his mind.

MWAH
Dir: Sara Soheili, 2017, Persian, 12mins, , ISLAMIC REPUBLIC OF IRAN
Five heavily pregnant women are in a Doctor's waiting room when suddenly the unborn babies start to talk to each other about the world they're about to enter…

PERCEPTION IS ALL
Dir: Paul Nash, 2016, English, 7mins, UK
A loner watches over the city – he belongs to a secret organisation that believes that everything we know will end unless at least one person is ALWAYS conscious and perceiving the world. He stays awake the only way he knows…

REAL ARTISTS
Dir: Cameo Wood, 2017, English, 12mins, USA
Based on a Ken Liu story. Sophia just scored every animator’s dream interview at world famous Semaphore Animation Studios. But everything is not quite as it seems once she nails the job.

H.A.M
Dir: Boise Esquerra, 2016, English, 16mins, USA
16-year-old Peter must cope with his crackpot father who builds a HAM Radio that inadvertently catches the attention of a creature from outer space.