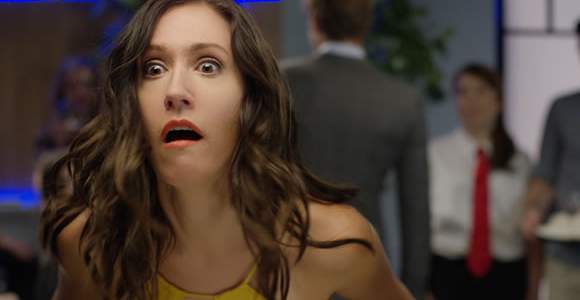 XMILE
Dir: Miguel Ángel Font Bisier, 2017, Spanish, 14mins, SPAIN
The year is 2184. Earth no longer produces oxygen. BioApps - body implants that allow humans to survive were created by big corporations. But this new society becomes transformed into senseless, unemotional robots. In this new world, what is the true cost

REKINDLED
Dir: Erin Brown, 2017, English, 12mins, USA
After a string of failed relationships, successful career woman Kate (35) gets the chance to rekindle romance with the love of her life -- her high school boyfriend by means of a magical groupon. But when she shows up to the date, he is still 16.

QUITTING TIME
Dir: Robert Dollase, 2016, English, 9mins, USA
In the age of the dinosaurs, a stubborn and obstinate time traveler refuses to learn the lessons of his future.

SMOKE GETS IN YOUR EYES
Dir: Charlene Bagcal, 2016, English, 7mins, USA
An aspiring singer, who still lives at home, is forced to perform at her mother's dreadful Tupperware parties. Determined to put an end to it, she devises a plan to freeze time with a mystical grenade. A definite WTF for the festival.

THEY CHARGE FOR THE SUN
Dir: Terence Nance, 2016, English, 17mins, USA
In a dystopian future where people live nocturnally to avoid the harmful rays of the sun, a young girl unravels the lie that has kept her and her sister in the dark.

MONSTERS
Dir: Steve Desmond, 2015, English, 13mins, USA
Jenn lives in an underground bunker with her family, protected from the monsters that now ravage the world. This is the day that she goes outside…

IAMEVE "STARMAN"
Dir: Thor Freudenthal, 2016, English, 5mins, USA
Two soulmates are reunited in a multi-dimensional plane of existence. It’s orchestral tapestry of sound and melody will worm its way down your ear canals to the base of your spine. Part of a transmedia fairy tale called The Everything Nothing.

ZERO SUM
Dir: Jimmy Hay, 2016, English, 20mins, UK
Ruth wakes inside a spaceship; she’s no memory, but as she looks out of the window and sees hundreds of identical ships orbiting a planet she starts to remember the pledge she made to begin a new life.  She also realises that she’s not alone.

WHITE LILY
Dir. Tristan Ofield, 2016, English, 11mins, USA
A tense spaceship captain and co-pilot set out to investigate a comet, when a technical fault cuts to the core of their relationship problem.