In a dystopian future where the UK is in a cold war with China, Vincent (Toby Stephens, DIE ANOTHER DAY) works on tech for the MoD, but his real goal (and one he must hide) is research to help his ill daughter. Searching for a breakthrough in the consciousness of machines, he starts to work with Ava (Caity Lotz, THE PACT). They develop a way to copy or imprint brain patterns to what becomes the titular Machine.

Soon a battle begins between Vincent and his shadowy, war-mongering boss Thomson (Denis Lawson, STAR WARS) over the best use of this 'smart robot'. 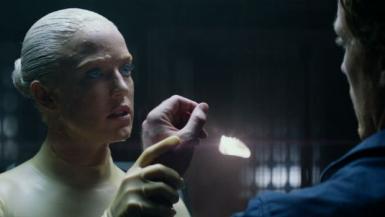 "Some films just look cool. Caradog James’ future-set cold war tale THE MACHINE is massively so. From an aesthetic standpoint it is slickly designed and beautiful on what’s surely a modest budget. Temperature-wise, it exists in a seeming eternally harsh space of overcast skies, nighttime and enormous, often barely-holding-up warehouses and labs. Star Caity Lotz is fluid and incredible in her movement. But what’s truly coolest is the ensuing warm, radical spirit that reveals itself throughout it all.

Also notable here is the convincing biomechanical prosthetics work of U.K. go-to FX-guy Paul Hyett (THE DESCENT, DOOMSDAY, THE WOMAN IN BLACK). Feeling unexpected, THE MACHINE and writer/director James aren’t afraid of where technology can take us in what amounts to an ultra neat pro-science, anti-war fable."