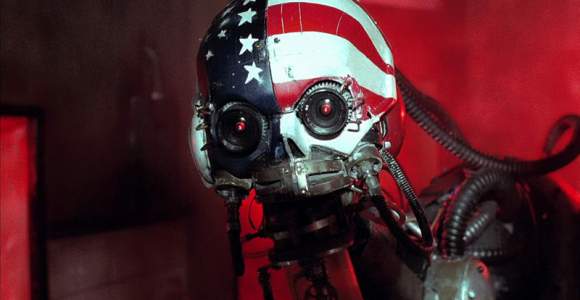 25 years ago this film warped a lot of minds, if you have never seen it – you must!

With its post-apocalyptic setting, robot-gone-mad paranoia, extreme gore, a Simon Boswell score, and a cast that includes Iggy Pop and Lemmy from Motorhead this one’s not for the faint-hearted.

An intentionally more punk take on films such as The Terminator, Stanley’s film is set in a world where humans are hell-bent on destroying themselves and their planet, whilst robotic killing machines are on the verge of turning on their creators and supposed masters.

From the resonant, ominous synth score to the brilliantly claustrophobic sets, this film is a unique cinema experience.

It’s safe to say it is a ‘marmite’ film – just marmite with a splash of LSD. Who couldn’t love that!

Watch out for news of a special music and visuals night PSYCH-FI which features Simon’s band theAND, along with some other very psychedelic artists and VJs.