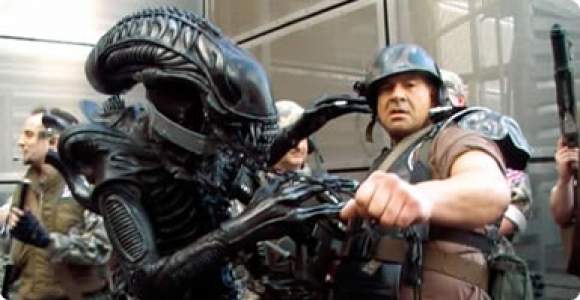 STOP PRESS: TREVOR STEEDMAN Will be at the screening! Watch this space for more news on Alien cast members!

A documentary on people who stage events and ceremonies using the ALIEN movies as their springboard. Featuring John Hurt, Lance Henrikson and many more.

Aliens will be on hand for photo opportunities!

The new Ridley Scott films will be in 3D and made with huge budgets as 20th Century Fox relaunch the franchise.

In 2011, Alien will once again be big news and media outlets will be crying out for Alien content.

This documentary feature follows fans of the Alien series of movies, inviting us in to their world of tribute to the cast and crew of these seminal sci-fi flicks focusing mainly on the Ridley Scott and James Cameron masterpieces, Alien and it's sequel, Aliens.

Presented and narrated by Trevor Steedman who played Colonial Marine Weirzbowski in Aliens, the film follows people from all walks of life who met online and have since taken their friendships in to the real world – using these movies as a catalyst to stage events and award ceremonies that have amazed even the film makers themselves.

From the UK via Europe to the USA, featuring cast and crew members from the Alien franchise including Lance Henriksen, John Hurt, Veronica Cartwright, Michael Biehn among others and the only coverage of the outstanding live action event 'The Alien Encounter' and the worlds biggest costuming parade featuring over 60 Colonial Marines and Aliens staged in Atlanta, USA.

The film was made for Twentieth Century Fox for the upcoming 'Alien Anthology' Blu Ray box set (Fall 2010).

You don't need to be an Aliens movie buff to be entertained.