STOP PRESS:
We have a small exhibition of original TRON items at the Apollo on the night we screen the film. Posters, stills, props and a few very rare items. Also, we have some video introductions to the film being recorded... book your ticket now!

Back in 1982, writer-director Steven Lisberger unleashed TRON onto cinema screens and stunned audiences the world over with the groundbreaking use of computer technology. In creating a wholly digital world, Lisberger tore up the rule book and paved the way for films such as TOY STORY and Avatar. On December 17 Disney will release the long awaited revisit to the ‘grid’ with Tron: Legacy and in celebration of the original film, Tron is being shown exclusively on the big screen once more as part of Oktoberfest.

Having developed a cult following in the twenty-eight years since its release, for many fans this will be the first and perhaps only chance to see Kevin Flynn’s (Jeff Bridges) digital odyssey in the cinema.

Boasting a glorious soundtrack by Daft Punk and shot in dazzling 3D, Tron: Legacy looks set to revolutionise digital effects all over again.

Along with this exclusive 35mm screening (from an original 1980s print!) fans will also have the chance to see the latest trailer and 8 minutes of 3D footage from Disney’s upcoming Tron: Legacy which was screened at the 2010 San Diego Comic Con.

Prior to the screening there will be a wonderful new 3D short film. 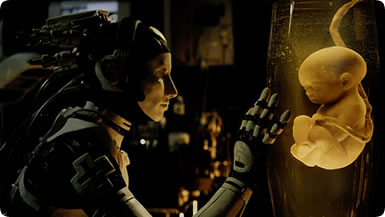 BREATHE is a short sci-fi 3D film which tells the story of the human races' last great effort to continue its existence, however, its search for perfection is ultimately its downfall.