Rise of the Machines

THE ROYAL SOCIETY plays host to an unashamedly robotic evening of discussion, demonstrations and drama.

Tom Hunter is joined by Tony Ballantyne, author of Twisted Metal and Prof. Dr. Kerstin Dautenhahn, Professor of Artificial Intelligence at the University of Hertfordshire. Kerstin is a pioneering researcher in robot social learning and imitation whose research interests include Human-Robot Interaction, Social Robotics, Socially Intelligent Agents and Artificial Life. 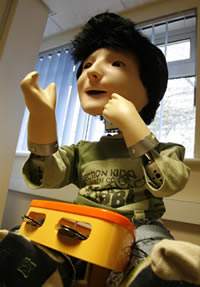 Kerstin and her colleagues will also introduce us to two KASPAR robots (Kinesics and Synchronisation in Personal Assistant Robotics).

These child-sized robots are being used in human-robot interaction studies in the context of cognitive and developmental robotics and assistive technology, including studies of the possible therapeutic and educational benefits of ‘robotic mediators’ for children with autism.

We will be treated to a rehearsed reading of extracts from Karel Capek’s 1921 play R.U.R. (ROSSUM’S UNIVERSAL ROBOTS), which is noted for introducing the term, ‘ROBOT’.

SCI-FI-LONDON has commissioned a modernisation of the work for the 10th annual festival in April 2011. This will be the first public preview of the work-in-progress.

This fabulous evening is in collaboration with the Royal Society’s 350th anniversary celebrations in 2010.

SPECIAL EVENT AT THE ROYAL society