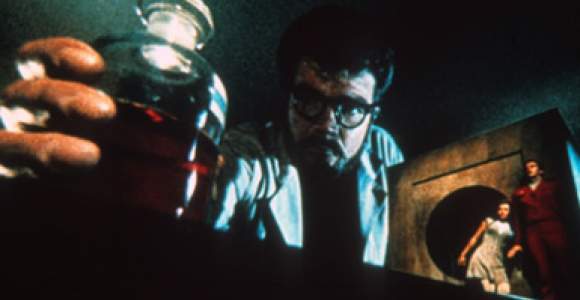 We are so excited about THE LAND OF THE GIANTS, THE TIME TUNNEL and VOYAGE TO THE BOTTOM OF THE SEA being released on DVD that we teamed up with Revelation Films to bring you a special night of classic IR TV.

Seventies disaster films in America can best be summed up through the work of one man – writer, director & producer Irwin Allen.

However a decade earlier the ‘master of disaster’ changed popular television culture both in his homeland and globally by creating groundbreaking programmes Voyage to The Bottom of the Sea, Land of the Giants, Lost In Space and The Time Tunnel. Through these shows, Irwin Allen’s fantasy world came to life, challenging conventional boundaries within the medium and paving the way for big budgeted productions and spectacular effects.

Last month saw the long-awaited DVD release of Land of the Giants and Voyage to the Bottom of the Sea, and in June The Time Tunnel will finally make it to DVD in the UK for the first time.

SCI-FI-LONDON is celebrating the legacy of these shows by screening a selection of remastered and previously never broadcast before episodes.

Voyage to the Bottom of the Sea

Join the crew of the Seaview, a high-tech submarine that is the mightiest weapon in the Cold War arsenal of the US, sent on perilous, top-secret missions to battle the enemies of mankind. Underwater adventure and tense psychological drama make Voyage to a classic espionage thriller of its time.

Land of the Giants

On a routine sub-orbital transatlantic flight from Los Angeles to London, passengers on board Flight 612 are sucked into a space warp and crash land on a foreign and alien planet. Whilst all 7 passengers and crew survive, they soon realise they are not alone for this is the Land of the Giants! The most expensive television show of it’s time, the Season 2 DVD will include UK exclusive cast commentary.

Screening Episode 1 The Crash, plus the original unaired pilot.

“The Control of time is potentially the most valuable treasure that man will ever find.” Scientists Tony Newman and Doug Phillips head Project Tic-Toc, a government installation buried beneath the desert. They have invented a Time Tunnel, which can visit anywhere in time and space. While testing the tunnel they became trapped in time, transported back to the past most historical events.

Screening Episode 1 The original unaired pilot of Rendezvous with Yesterday, plus the 2002 remake of the pilot episode.

This event is free, starts at 11.45pm on Thursday 28th April at the Apollo. Registration is essential.