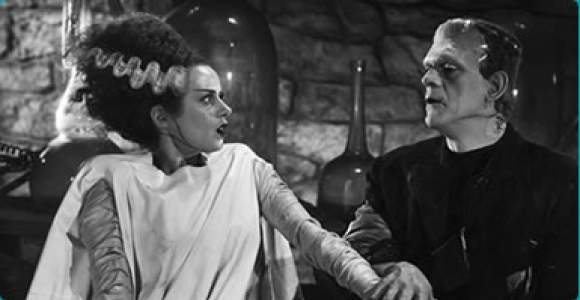 The evening will start with Buck Fizz at 11pm with the 1st film starting at 11.30pm.

Spend a night with us then wander down to the wedding parade! We will be showing;

Starring Lon Chaney, Barbara Payton and Raymond Burr. The owner of a plantation in the jungle marries a beautiful woman. Shortly afterward, he is plagued by a strange voodoo curse which transforms him into a gorilla.

Starring Bela Lugosi. A newspaper reporter begins to investigate after a series of brides die suddenly during their wedding. Her quest leads her to the secret of eternal youth and almost gets her killed.

Bela Lugosi in his finest role... well ok, it is an Ed Wood film, so it will be a bit silly. Dr. Varnoff captures men for his experiment: to turn them into supermen using atomic energy. Newspaperwoman Lawton gets too snoopy for her own good.

Starring Boris Karloff and Elsa Lanchester. Mary Shelley reveals the main characters of her novel survived: Dr. Frankenstein (goaded by an even madder scientist) builds his monster a mate.

Check out the trailers below:

Bride of the Gorilla (1951) - Trailer by MysticOne