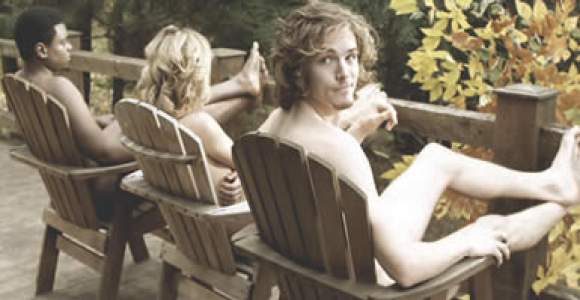 Three teenagers are on a camping trip to a small island in the middle of a lake. When the girl in the group needs to answer a call of nature, but doesn’t feel comfortable about doing so in nature, she finds an old, immaculately furnished house that appears to be abandoned, and does her business in comfort.

During the night, a massive lightning storm (of course) drives the trio from their tents to take refuge in the house. There they take full advantage of the amenities, until they make a gruesome discovery in the basement, just before the displeased owners return.

The friends’ fates seem sealed. Their attempt at escape is fruitless, but a last minute rescue comes in the unexpected form of three naked people who seem uncannily familiar.

This film combines all the necessary elements of the mad-scientist/house-in-the-woods genres, but adds just the right amount of humour to elevate it above the typical teen flick. A few unexpected surprises secure this film’s position as a quirky piece of brilliant film. Clone Wars this ain’t!

YOU WILL BE REPLACED!