We are delighted to announce the winner of this year’s Best Short FIlm Award is BRUTAL RELAX, directed by David Muñoz and Adrián Cardona. 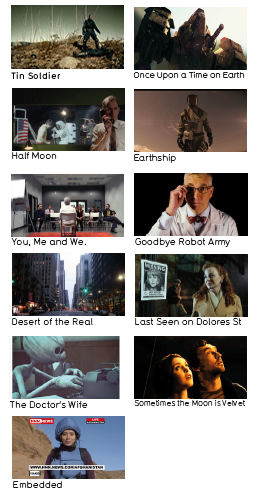 ONCE UPON A TIME ON EARTH

(Ian Hothersall, 2010, UK) An intimate and personal story against a backdrop of world shattering events.

(David Wilson, 2010, USA) 2047, the Whitmores have remained hidden from the world for years. Then she arrives.

YOU, ME AND WE

DESERT OF THE REAL

(Devi Snively, 2010, USA) A heartbroken woman says goodbye to an old pet and hello to a new nightmare.

(Julian Grant, 2011, USA) The love story of a doctor who must save his ailing wife.

SOMETIMES THE MOON IS VELVET

(Tom Phillips, 2010, UK) Jack, a fisherman, finds a velvet dress at sea that he believes will bring him luck.