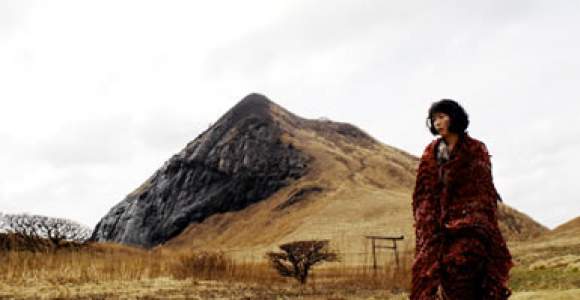 A sci-fi rock version of Shakespeare’s ‘The Tempest’, shot on Sado, one of Japan’s biggest islands.

It is the near future and dangerous rock music is banned. Rebel singer Juntoku is exiled to an island where it’s always winter.

Thrown into a brutal prison, he is visited by a mysterious young woman, who appears to have lost her mind and sings snatches of ancient ‘Demon Songs’.

Juntoku escapes and flees to the interior where he meets a man who seems to know something about the Demons and their songs.

Jun begins to piece together the fragments of the ‘Demon Songs’ and as he does so he begins to understand that the songs contain a terrible power.

Maybe the songs brought the terrible storm that destroyed the island. Maybe nothing is really as it seems. Will Juntoku complete the song? Will he sing to bring the storm or to bring back the Spring?

The Tempest has been filmed hundreds of times in many different languages, and most famously adapted as FORBIDDEN PLANET.

The play has a fantastical, magical atmosphere and a very simple plot, Sado Tempest melds dystopia, Japanese rock, Noh theatre, and the weird volcanic landscapes of Sado Island in this radical reworking.