Tiger & Bunny Part 2 sees Hero TV return, bringing you the latest escapades from our heroes in Sternbild city.
We return to this futuristic megapolis that sits above water. Home to these super-charged, heroic characters, with some kick-ass gifts, whose full-time job it is to protect the city. They are the NEXT (Noted Entities with eXtraordinary Talents).

As you most likely recall, it’s not called Tiger & Bunny for nothing. Our two central characters were forced to work together. They are Kotetsu Kaburagi, the hero with old-fashioned values whose heroic alias is “Wild Tiger” and Barnaby Brooks Jr (Bunny), the popular rookie hero not afraid to reveal his true identity to the world. The dynamic duo found themselves against the idea of working together, but soon learnt that working together actually made them much, much stronger. Namely because of the similarities in their powers, or shall I just say the fact they have the same power within them. 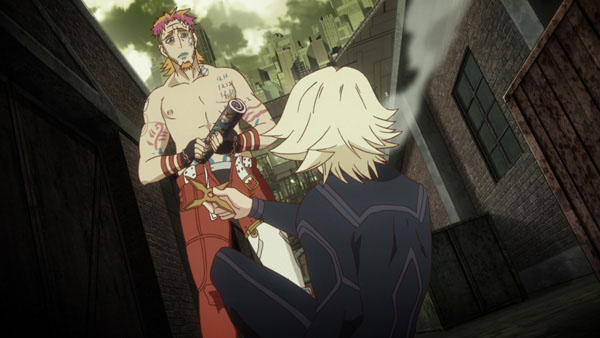 The progression in these 6 episodes presented in Part 2 begins giving us a clearer impression of the direction the series may be heading. Whilst the first set of episodes shown in Part 1 was relatively slow, it still captivated the audience. This release sees much more in terms of story development, with the main storyline beginning to intertwine with popular Barnaby Brooks Jr’s search for the truth about what happened to his parents.

Just as our heroes thought they were getting a day off (even if in some cases they were forced to take that day off) they are immediately asked to return to duty, as terrorist attacks begin taking place all over town. We begin to see how being a hero is a full-time job that can get in the way of family. Just as Tiger thought he was going to be able to see his daughter (who is unaware of his duties or job) she ends up disappointed when he is once again called to duty, disrupted from his day-off. The sad thing is because he has those morals and values of an old school hero, he believes one’s identity should remain hidden, especially from those the hero loves. After all, if the identity of a hero is known, that could easily make those close to him, targets. 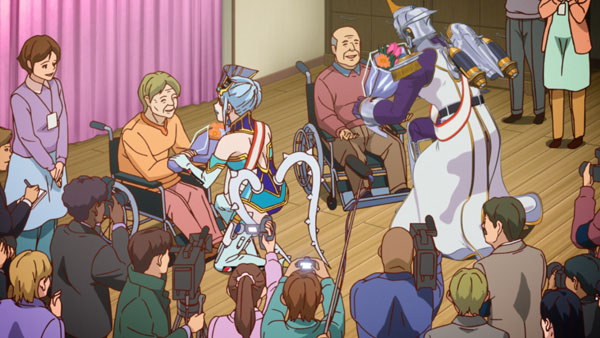 Who are these terrorists and what are they after you ask? Well, things begin to take an interesting turn. Barnaby thinks he has finally found the murderer of his parents, Jake Martinez, who is currently in prison serving an extraordinarily long sentence. So it seems he is going nowhere for a very long time indeed, well that would have been the case until the terrorists begin to make their demands.

Proclaiming themselves as the group known as Ouroboros, the very same group Barnaby has been investigating in connection with the murder of his parents. Their demands? They want the release of Jake Martinez. Now the question is, do they go against these demands? Which will result in the destruction of the pillars holding up the city, after all, as the terrorists say, no one can tread water for eternity. Or do they succumb to these demands of these terrorists? This would mean releasing a criminal onto the streets, and trust that they will keep their word? And as always, trusting the word of a known terrorist group isn’t the wisest thing. However, the mayor feels as though he has no other option as the fate of his city is in jeopardy. So it’s Jake Martinez, or the city. It’s a no win situation, or so it seems.

Barnaby’s story is made public regarding his parents, helping make this whole situation great television, as those behind Hero TV enjoy each development, whether good or bad. The mayor decides to do as the Ouroboros group say, but they go against their word and then to make it more interesting begin challenging the NEXT, one by one (chosen using a deck of cards), with the city as a hostage.

It turns out, not only are the terrorists Ouroboros, they are also NEXT. They believe they are above humans because they have been chosen to have gifts. Deluded in their self proclaimed superiority. Could this show that there are NEXT out their with similar opinions or think they should not be protecting and serving society, but instead treated as a god?

A nice addition to the story. Again simple to follow and uncluttered from too many sub-stories. Slow progress, but things really do start getting more to the meaty part. 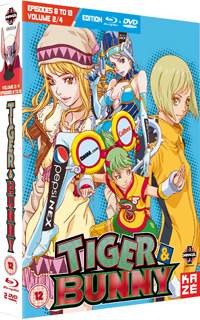 But what can you expect from a mere 6 episodes? I certainly can say how much I enjoy watching a show that isn’t too complex, going at just the right pace. Tiger & Bunny gives you just enough of the good stuff to get you wanting more.

Out Now on DVD & Blu-ray combo pack by Manga Entertainment

Also out now is King of Thorn on DVD & Blu-ray combo pack, about a virus stricken earth and the survivors’ attempt to save humanity from this other-worldly evil. And, out on 27th May is the wonderful continuation of the alchemical adventures of the Elric brothers in Fullmetal Alchemist: Brotherhood - Part 4, available on Blu-ray.