Studio Ghibli. Even those who are are not necessarily anime fans have likely heard of the name. Studio Ghibli is undoubtedly the most renowned anime studio both sides of the hemisphere. With many titles that have touched the lives of those who have watched, and have most certainly inspired.

We have some great news from our friends at Stratford Picturehouse – home of SCI-FI-LONDON. This Sunday they will be screening a very special double bill of My Neighbour Totoro and Grave of the Fireflies, both celebrating 25 years. This will be the first time you get to see these two spectacular Ghibli productions on the big-screen together! And just the way we like it, these will be the Japanese language versions, with English subtitles.

My Neighbour Totoro is an absolutely charming tale, probably THE defining movie for Ghibli, and the work of Hayao Miyazaki (the most famous anime creator in Japan). The story follows two young girls who discover their home just so happens to be near a mystical forest inhabited by fantastical creatures known as Totoros. This is certainly a great one for all the family!

Grave of the Fireflies is another Studio Ghibli masterpiece, but this time by Isao Takahata. A stunning and emotional telling of the time after World War II and the state of the Japanese lands after these heartbreaking events. Following the story of two orphaned siblings and their journey and struggles; this touching story is a prime example of how animation is for children and adults alike, dispelling that myth some have in the notion that animation is just the kids. 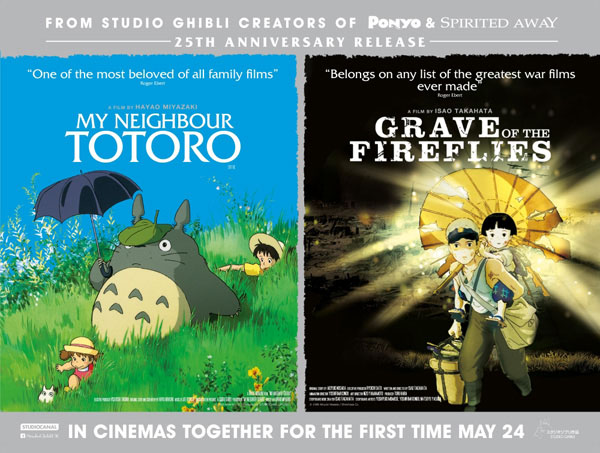 These will be showing at Stratford Picturehouse, in East London this coming Sunday, 26 May 3.00pm. And with the half-term taking place next week, those wanting to introduce the world of anime and Studio Ghibli to your little ones will be able to catch the English Language (dubbed) version of My Neighbour Totoro Monday through to Thursday, at 11.30am. Perfect for families, as well as anime fans who want to watch this it in its dubbed form.

And the fun doesn’t stop there. If you didn’t get the chance to watch 009 RE:CYBORG (review coming soon) as part of the Anime all-nighter here’s your second chance to watch it. 009 RE:CYBORG is Kenji Kamiyama’s reworking of Shotaro Ishinomori’s Cyborg 009 franchise, which is getting a release in a select number of cinemas across the UK. Stratford Picturehouse will be doing a one-off screening in 3D on Thursday 13 June, 8.30pm.