From Up On Poppy Hill

It is often the case that a creative piece can have expectations cast upon them, based on the results of its predecessors. When I watch a film or anime in general, I like to go with an open mind and no expectations; this allows you to enjoy the moment that much more, particularly when you strike the subtle gold of a beautifully touching story. And, with a studio such as Studio Ghibli behind From Up On Poppy Hill, the expectations are certainly set for most.

Studio Ghibli is the animation studio on most minds when you refer to anime, or simply put, the “Disney of Japan”. Anime fan or not, you’ll find you are likely familiar with the name Ghibli. Well, unless you’ve been hiding under a stone (and often that is me) you will be aware that Studio Ghibli’s latest UK release is titled From Up On Poppy Hill. This new anime is the works of Goro Miyazaki, whose directorial debut began with Tales from Earthsea back in 2006. Eventually following in the footsteps of his father, the world-renowned Hayao Miyazaki, after some initial hesitation of entering the world of animation. And this latest works is a true treat, simple and stunning. A definite must see. 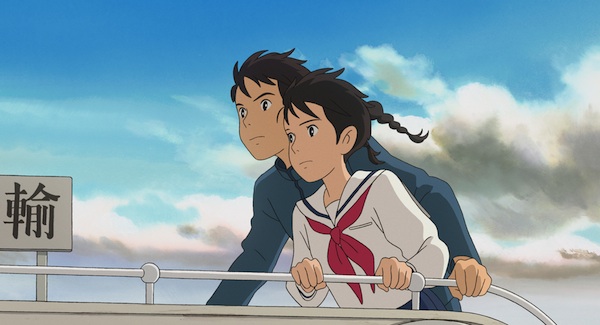 From Up On Poppy Hill is set in Yokohama, in 1963, just after the devastation of the Second World War and a year before the Tokyo Olympics. The story follows high school students who are set to be the first generation of a new Japan. New hopes are held in the hands of this new generation, attempting to move forward. Whilst change and progression is important, there is the realisation that the things of the past help make them who they are in the present. Ensuring the memories of the past is not forgotten in the change for a brighter future is a clear and beautiful message that you’ll come across when watching this.

The story features Umi, a girl whose father worked at sea, so when she was younger she would hoist signal flags, awaiting his return. Even after the loss of her father, Umi continues to hoist these signal flags, representing 'U' and 'W', which translates to ‘Safe Travels’. A beautiful routine, perhaps in the hopes that one-day the impossible may come to pass.

Umi lives on a beautiful hill, and one day meets a boy named Shun, both high school students in the same school. The story follows the two, and the thrill and beauty of a young romance in bloom, the challenges that face them, as well as the efforts of the young students in an attempt to save a structure dear to them, threatened because of the urge for change and development by the decision makers, readying themselves for the Olympics. 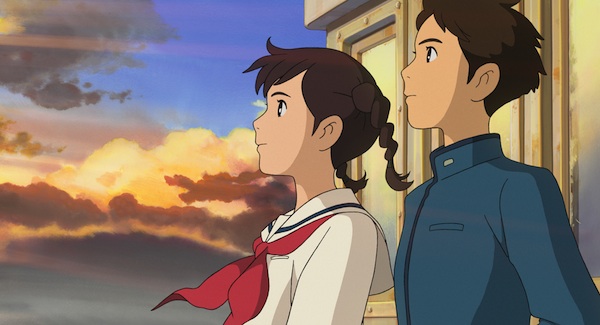 When I first heard about this, I was thrilled. So when I was actually invited to a screening, I knew I couldn’t miss it. From Up On Poppy Hill is a beautifully touching film, simple and elegant. Not afraid to follow the route of a basic storyline, with a few surprises along the way. If I’m honest, the first part of the story hadn’t quite gripped me, but through the gradual development I soon felt moved by the story, and cared for the characters. By the end I was touched, the simplistic beauty of the story, the subtlety, the twists, the perfect choice of music. All in all, From Up On Poppy Hill had certainly left its mark, and I look forward to watching it again. Go see!

From Up On Poppy Hill is released in selected cinemas from 2nd August. You can watch it at Stratford Picturehouse, and home of SCI-FI-LONDON from 9th August (tickets go on sale on Tuesday).