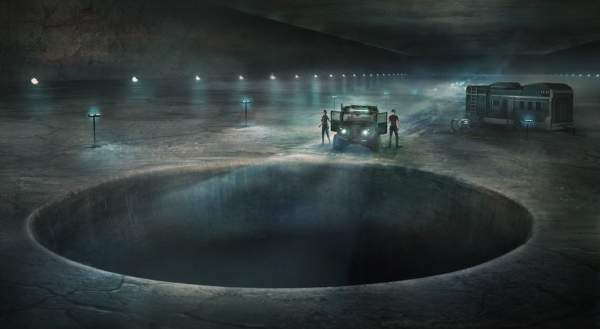 Cerberus Rex has been nominated for best sound design/original music score in the 2018 Webby Awards and the 2018 people's voice awards.

Dr. Anabela Correia, a professor of astrophysics at Hawksmoor University, travels upon request by a former colleague to Well Station, a research facility performing experiments on a strange phenomenon in an underground cave. A natural explorer, Ana rushes to view the odd marvel first-hand and, accompanied by Well Station Security/Containment Officer Benjamin Wyngarde, is soon staring down at a mystery of physics hidden deep.

The show was released on SCI-FI.COM in October 2017. Merchandise and a track from the score are available for purchase on the show website.

"[A] whopper of a science-fiction horror adventure" "[I]t has the same richness of sound as you would expect from a Hollywood adventure movie." "Cerberus Rex’s true success is the harmony of its script and sound. Nothing feels out of place, as it either services the plot or the understanding of the characters and their relationships… Anabela Correia does not let anyone make any decisions on her behalf, nor cut her out of her own destiny. Every decision she makes is informed, rational, and brave…she is quite likely one of my new favorite fictional academics." – The Bello Collective

"I love audio dramas and I was excited to give Cerberus Rex a listen since it promised to provide an experience the press release claimed was inspired by John Carpenter and H.P. Lovecraft. That’s some big shoes to fill…and Jason Hardcastle (the creator) and crew manage to pull it off. Cerberus Rex is one hell of an adventure and the production value is through the roof for the 85 minute long show." – The Nerd Mentality

"Correia is such a well-written character, that I probably could’ve listened to her deliver an astrophysics lecture for the whole hour and a half. She is immediately engaging in both character and performance. Natali de Assis does a wonderful job as the lead voice actor of Cerberus Rex’s inquisitive protagonist." "I must confess: I thought I would casually listen to this podcast while I painted my son’s bedroom. Instead, I sat down on the floorboards and listened intently." – Andromeda Spaceways