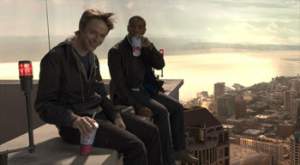 SFL: How did you get cast in your role? MBJ: The casting process was…I hate auditioning. As an actor, you prepare, you drive yourself crazy before you go in to a room. Then, once you get there it’s wham, bam, thank you ma’am! You’re looking around to see if they’ve left money on the dresser. It’s one of those experiences. But it’s a process that all the actors have to go through. The goal is to get to a point where I never have to audition again, which is why I put my all into auditions now. And for this guy, auditioning for Josh, it was fairly straightforward. I auditioned one time. They passed on me. They went on to cast in England or wherever else they went and then they came back to me. I tested again and I ended up getting it, so I guess it was meant to be.

Did you have screen tests with the other two guys? I did not. I auditioned one time solo, and then another time with Dane and Alex. That was the only audition I had. 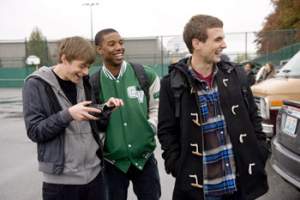 Did you improvise a lot? We did, I think that’s one of the cool things about this movie. It’s not a lot about what’s on the page, but it’s about the chemistry between the guys and it was organic and real. We found a lot of organic moments through improvisation and just seeing where a scene goes. We found a lot of cool stuff. And working with Josh, the fact that he’s twenty seven and he’s young, and I’m twenty four, I’ve never worked with a director so close in age. And we collaborated on stuff and we could say, “What do you think is cool? I think this is cool. Okay, cool!” We both kind of spoke the same language. It worked out.

Were you worried this was going to be too much of a special effects movie? The fact that I knew it was a low budget film meant there weren’t going to be too many special effects! But I think it worked out perfectly. We had enough but it wasn’t distracting. You really cared about the characters from the beginning. You cared about what happened to Andrew, what happened to Steve, and what happened to Matt. It wasn’t just, where’s the monster at now? Or what building are we going to blow up, etc. It gave this relatable theme to a movie where kids nowadays can relate to. Especially in this modern Facebook, Twitter, YouTube thing where everybody’s video journaling their life, people can relate to this. I think Steve represents somebody, Andrew represents somebody, and Matt represents somebody. And I think the fact that we banded together showed people that it doesn’t matter what walk of life you come from, you can bond over situation. Good or bad, it depends on how you take it. How will it work out? You have control over your own destiny, in a way. I like that that message is the takeaway.

If you had telekinetic powers, what would you do? That’s such a loaded question, because I want to give you the truth but I don’t want to get myself in trouble. Me, personally, I would probably start off playing around, jokes and stuff. You know, the girls and stuff. I would be the best bedroom gangster ever. Then I would probably test my limits to their abilities. Maybe I’d rob a bank and then return the money, because I could. Or maybe I would use my powers for good. I’d save kittens out of trees and stuff like that. Walking on water, I’d do some crazy stuff. I’d have fun with it. 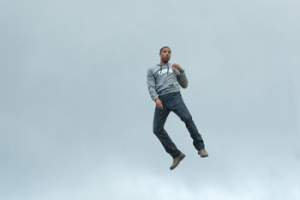 How did you learn to fly on set? There’s this woman named Gina, she’s a trainer from South Africa, and if you ever see her, you run in the other direction. She is an animal! Guys think we’re strong. We do push-ups; we think we’re in shape. I play football, I’m in shape. Pilates and yoga make me check my ego at the door. Core strength is something different. Just trying to lay flat in the harness was difficult. So the training we went through in the first two weeks was difficult. They wanted to maximize the length of time we could be up in a harness. They wanted to have us up there all day.

No accidents or injuries? No accidents to us besides…well look, we were in these harnesses. There’s no getting around it. Men were not made for harnesses. Our anatomy just does not agree with it whatsoever. So being strung up by a thong for hours at a time ten stories off the ground and all I can think about is, if this wire snaps, how do I survive? That’s what was going through my head the whole time. So that was a bit much.

Tell me about your social networking. What do you do, Twitter, Facebook? I’ve been encouraged to Twitter more. I’ve got too many loaded thoughts for Twitter so it would get me in trouble. So I have a reckless best friends who tweets everything I’m thinking, so it works out. But I’m more on Facebook. Facebook is cool. It’s controlled a little bit more than Twitter. With Twitter, whatever’s out there is out there and there’s no going back. You can definitely get in trouble on Twitter. Facebook’s a little more controlled because you can accept who sees your posts. Instagram is one of my favorites because I love taking pictures. Pictures are worth a thousand words and you can just put it up there and people can comment on it and like it or not like it. It is what it is.

Do you feel you have more room to stretch as an actor in films versus television? I think, yes and no. It depends on the context of the scene, the character, etc., how much leeway you can take. If you want to have that conversation with the director and there’s reasoning behind it, I see there’s more room for you to do that in a film. It makes more sense to the arc, because there’s a beginning and end. It’s not a show where there are so many other elements. On a show a decision can have a butterfly effect because you don’t know how it will ripple across everyone else and where they’re going to end up. In a film, it’s an open and shut case. You can plead your case and make it work, or you can get an objection. So, to answer your question, movies for sure.

What did you learn on this movie? Patience. I learned patience on this film. I learned that you can do a lot with a little. A little goes a long way. We learned how to stretch our time, our dollar. And preparation is one of those key things. A lot of people say, “Oh, this can’t get done because we don’t have the money,” but if you prepare and rehearse enough, walk into a situation well equipped, you can get anything you want done on any film. And always be open to something new. We did so many new things that had never been done before on this film and I think it worked out just fine. It’s a model for where you can get more done for less.

Can you elaborate on some of the new things that have never been done? Things like camera angles. For our flight scenes, it was the first time they used those flying rigs. It was the first time they had ever been tested at all. So we were the guinea pigs, hamsters. We felt like hamsters because it looked like a hamster wheel. It was like this iron rod attached to our hips. The camera was on a jib and you have free range of motion, so you can do whatever you wanted to do. I don’t know why nobody else thought of this, but we were the first to do it. We mimicked a lot of our flying scenes off of skydiving. That’s what it would look like if we were to do it and had a handheld camera. We didn’t want to do the standard, Superman type of flying that was cliché. We wanted to make it as real as possible, and we did it. So we were up there in pea coats and winter jackets. And it worked out.

The mind-bending extended edition of Chronicle with thrilling new footage will be available exclusively on Blu-ray from 28 May.