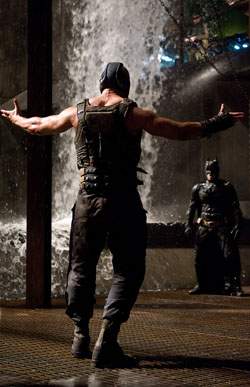 For genre fans this year has been a pretty good one. Apart from two fantastic SFL festivals showing possibly the the highest concentration of really films that we have shown over our 11-year history, this year seems to have been the year of the "highly anticipated" movie with Avengers (Assemble), Prometheus, The Amazing Spider-Man, The Dark Knight Rises, and The Hobbit Part 1 out any day now. Of those films, Avengers exceeded all expectations; Prometheus less so, let down by a script that wasn't sure what story it was telling; the Spidey reboot (or whatever term the marketing people are throwing around at the moment) was fun but divided critics and audiences; and Christopher Nolan brought the final chapter of his Dark Knight trilogy to the big screen (and I mean big), with his use of IMAX cameras. Now it is out on DVD/Blu-ray, just in time for Christmas, if the fanboys/girls can hold off for that long.

As with Prometheus, The Dark Knight Rises didn't quite live up to the hype, but Nolan is a consummate filmmaker who, to his credit, ignored the fad for 3D and remained resolutely old school, shooting on film and using, wherever possible, practical effects. This analogue man in a digital world brought a cold, hard reality to the film that the movie's dark story demanded, separating it from the almost garish, CG-enhanced and obviously comic-book universe that Marvel delivers. The extras/special features on the Blu-ray explore in detail Nolan's filmmaking process in a solid selection of featurettes, which, frustratingly do not have a "play all" option. Watching all the practical effects reminded me that during the film I couldn't help thinking how much the shots must have cost, and I was almost expecting to a dollar counter on the side of the screen giving a running total of its $250m budget.

When I saw this film at the IMAX I was a bit disappointed with the film, even though it looked spectacular. There's no denying that Nolan set a new benchmark for comic-book movies with The Dark Knight, mostly thanks to Heath Ledger's bravura performance as The Joker, which completely overshadowed Bale and the rest of cast. Although Batman is ostensibly the hero of this movie, as with the previous one, Bruce Wayne's alter ego is more Bitman than Batman as the guest villains steal every scene. 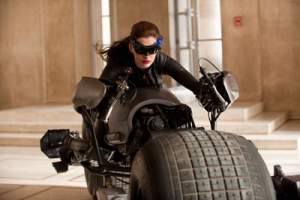 Anne Hathaway's leather catsuited lithesome form was the perfect choice to play Catwoman, forever removing from people's minds the debacle of the Catwoman movie, although the sight of Sharon Stone and Halle Berry fighting is still worth remembering. Hathaway adds both class and much needed humour to the film, and not just kick-ass eye candy, which she does with such panache. As does Marion Cotillard as Miranda Tate, the rich energy philanthropist who is helping draw the reclusive Bruce Wayne out of his self-imposed exile (read: sulk).

Of course, it is Bane who makes the biggest impact, especially on Batman. The Dark Knight might have the Darth Vader costume (or vice versa), but Bane has the megalomaniac attitude, mojo moves and the voice of the Sith lord, thanks to the life-supporting mask. Tom Hardy's talents are almost wasted on the character. They could have easily used any musclebound actor to play the part and got Hardy to overdub the dialogue, which he clearly did anyway. When Bane and Batman tussle it gets pretty brutal, especially as Bane is said to have also been trained by Ra's Al Ghul.

All the old guys are still there - Gary Oldman, Morgan Freeman and Michael Caine, although Caine gets landed with some of the worst dialogue in the film, and unfortunately there is quite a bit of not only bad dialogue, but also a lot of expositional dialogue as well. The sort of stuff that weighed down the later Harry Potter novels. Some of it could have easily been removed from the butt-numbing 160-minute running time, especially as some of it was used in an almost rookie writer's error of being delivered at a crucial dramatic moment. You know the one where the villain delivers a monologue just before he is about the kill the hero, to give the hero (or another crucial character) time to stop him. The other rookie mistake/cliche is the countdown clock on a bomb. It's been done so many times before it doesn't really increase the tension, even if it does reveal lots of last act twists and turns. These and the plot holes other logical inconsistencies aren't quite as annoying on a second viewing, because of the prior knowledge, but it did make the film slightly more superficial as the emphasis was mostly on the action, and the aforementioned imagined budget tally.

Nolan is a great director with a great gift for the craft of filmmaking. His films are always intelligent, although veering a bit too much to the cerebral. While his Batman films did raise the bar for superhero movies, a challenge that Marvel more than met, I get the feeling his reel forte is for smaller, character-driven films, such as Memento and The Prestige, and it would be great to see him return to those films and leave the effects spectaculars to those filmmakers that don't have anything to offer.

Apart from the previously mentioned "making of" features, there is a fascinating hour long doc on the history of the Batmobile, with some great stories from the people that made them, and those who got to drive them.

The Dark Knight Rises is out now on DVD, Blu-ray and digital download.