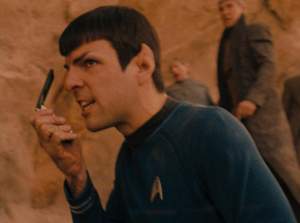 Remember the Star Trek communicator? It was a far-out novelty during the original 1960s television series, but now those flip models are positively retro. The ubiquitous phone of the mid-1990s, the Motorola StarTAC, was, all must admit, certainly inspired by the communicators of the 23rd century. (That sentence may seem backwards, but remember that space/time is fluid.)

Maybe it didn't chirp when you swung it, but it certainly made a pleasing snap when you cracked it open. And the name! StarTAC! You need Chekov to take you into stellar cartography and draw you a map? Therefore, logic dictates that since this bit of Treknology came true, it's only a matter of time before we see the others.

This forward-looking franchise has always been about an optimistic future, from a social perspective, sure, but also in terms of technology. Awesome gizmos and gadgets are all over Star Trek Into Darkness, but J.J. Abrams and company remain determined to put a little extra dash of sci into their fi. While we aren't about to zoom off to Kronos with 72 photon torpedoes just yet, here are 5 steps being taken to bring the Treknology of this film into reality.

Captain Kirk and the Federation are facing a threat from humanity's past. Oh, no – time travel? Not exactly.

The domestic terrorist known as John Harrison (Benedict Cumberbatch) emerges from seemingly out of nowhere because is is a man from a different century. And he and his family of shipmates have been kept in cryogenic tube chambers.

Cryogenics is a word that gets thrown around a lot. Walt Disney's brain is somewhere on ice, ready to be thawed out when medicine evolves, right? Actually, wrong - that's an urban myth but baseball legend Ted Williams really did take the icy plunge. Cryogenics is a real science.

All the term really means is keeping something super cold to manipulate it at this new temperature. When Clarence Birdseye first flash-froze leaf spinach in the late 1920s, he was a cryogenic scientist. (You can still find his work at a supermarket near you!) Cryopreservation has been used in reproductive biology for years (sperm banks are a chilly place) – but is there any chance that we'll be able to freeze a person and revive them years later?

Noted physicist Michio Kaku says it won't work. He says human tissue is not just not conducive to the freezing and reviving process (unlike frogs and fish which can freeze in a body of water over winter and have increased levels of natural “antifreeze.”)

However, he doesn't rule out that we may invent a process to circumvent this in the future. That's lucky for the few companies that do offer tanks in which to spend your post-mortal years in the hopes of one day getting thawed out. Robert Ettinger isn't just the founder of the Cryonics Institute in Clinton Township, Michigan – he's also a client! After he died his son plunked him in a vat and, so long as they never lose power, he'll stay in nitrogen at -130 Celsius until tomorrow's geniuses figure out how to bring him back. 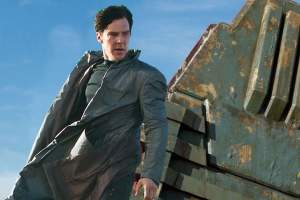 Of course this John Harrison is more than meets the eye. As was revealed in theatres (leaving many longtime Star Trek fans grasping for smelling salts) John Harrison is actually Khan! Khan Noonien Singh: the fearsome, genetically altered superman who brought devastation to Earth during the Eugenics Wars.

Unfortunately, the evil side of Eugenics does have some basis in mankind's history. Ethnic cleansing, it is sometimes called. But is there a way – ethical or not – to create some sort of “super DNA?”

Not yet, but it isn't implausible. Recently – and I mean earlier-this-year type recently – a new protein called Cas9 was discovered. This little protein has the ability to snip strands of DNA in a very precise manner. Previously, if you wanted to make an incision in a strand of genetic code, it would be like trying to cut a thin strand of angel hair pasta with a wooden oar. Now, scientists will have the ability to make very specific edits.

What will we be able to do with this? Well, the next step is adding bonds to DNA. Of course, this discovery happened to make better yoghurt. But will this lead to creating bigger, faster, stronger, wiser humans in a manner that doesn't involve rounding up undesirables? I admit, it's all very strange to think about. I'd be happy if we could just genetically code future generations to prevent them from talkingon their phones in movie theaters and leave it at that. 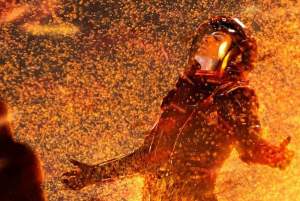 Star Trek Into Darkness begins with the mighty Enterprise troika of Kirk, Spock and Bones on an away mission. Our Captain and Chief Surgeon are creating a decoy to get the native Nibirans away from their temple, at the base of a volcano that's about to explode. Once away, Spock will descend into the gaping maw of angry lava and lull the tempestuous rupture to back to sleep. (I guess if you are from Vulcan you know a few things about vulcanology – zing!)

His method is to whip out a cold fusion bomb in a briefcase – what, you don't have one? Well, don't feel too bad – cold fusion hasn't been invented yet, but it isn't for lack of trying.

Cold fusion is the theory that a nuclear reaction could be created in such a manner that does not require volatile temperatures. Right now, it's a bit of a quixotic venture, without too many devotees, but for a little while it had quite a bit of heat on it, if you'll pardon the pun.

Martin Fleischmann and Stanley Pons shook the scientific world in 1989 with experiments they felt showed cold fusion to be a viable energy source. They were quickly dismissed by the larger community and their work has a bit of a fringe-y air to it now, therefore making this a beloved topic of conspiracy theorists. The fact remains, though, that under certain conditions, some elements (Deuterium and Palladium, among them) do give off energy emissions for reasons that scientists can't quite put their finger on… or replicate satisfactorily. Last year, philanthropist and investor Sidney Kimmel gave $5.5 million dollars in research (and, no doubt, ownership of patents) to further study.

Star Trek Into Darkness's version of cold fusion is therefore way, way in the future. Its cold fusion device won't just come in a snappy briefcase but, when initiated, would actually absorb excess heat and energy – enough to chill an angry volcano.

To explore strange, new worlds you have to GET there. There wouldn't be much trekking into darkness (or anywhere else) if it weren't for warp drive.

At the core of Fermi's Paradox is the undeniable fact that the galaxy is an enormous place. If we don't get out and boldly go where no one has gone before, new life and new civilizations may never bother to come look for us. We need faster-than-light travel.

Warp drive is an essential piece of Treknology and there are many slavishly detailed pages out there devoted to explaining how the dilithium crystals, matter-antimatter chamber and subspace bubbles can zip the Enterprise across vast distances in quick speeds. (Heck, the Internet was kinda built on this stuff in the 1990s.)

Here's the thing – some very smart people are taking these ideas seriously. Among them, theoretical physicist Miguel Alcubierre, whose “Alcubierre Drive” posits that spacecrafts may one day travel faster-than-light not by having great propulsion, but by manipulating space around it.

It all sounds very out-there, but a lot of the mathematics (apparently) add up. You can poke around the Internet and see how far you can get in these descriptions before you shrug and say “sounds good to me!” It's good to have this edge while watching Star Trek Into Darkness, especially when one of the big space battles actually takes place while at – and dropping out of warp!

We often wonder about the road not taken, don't we? Well, many scientists, even respected ones like Stephen Hawking believe, to an extent, that every possible outcome to a situation exists out there – in a parallel universe to our own.

If only somehow there were a way for these myriad corridors of spacetime to somehow drip into one another, well, we'd have a situation like we do in the J.J. Abrams 2009 version of Star Trek. Namely, a world in which we've got two distinct Spocks running around.

The red matter-generated wormhole that zipped the Romulan Nero and the legendary Vulcan ambassador over from the pre-established timeline to this new one wasn't just the greatest casting coup/fan appreciation moment of our era – it was a logical endpoint to what we currently understand about quantum mechanics.

It may sound crazy, but before something happens, every possible permutation of that event has to happen in a higher dimensional space than we can observe. I'm not talking about World Cup wins, but the motion of subatomic particles. However, our reality is built on these particles!

So, in a manner of speaking, everything possible physical outcome kinda-sorta happens, but MOST of what's happening is what seems logical to our perception. (Pour yourself a cup of coffee and try to dig into what is called the Copenhagen Interpretation. If nothing else, you'll hear a story about a famous cat.)

The point is this: if you really dig into the more-respected-than-you-might-think Multiple Worlds Interpretation, it isn't just that there are two Spocks running around in the Star Trek stories – it's that there are actually two Spocks (and three Spocks! And more!) just like the ones Zachary Quinto and Leonard Nimoy play in OUR world, too. You just have to trust me on this one.