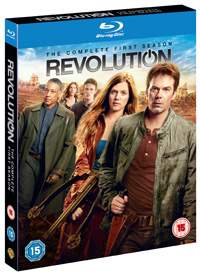 In the glut of post-apocalyptic films and TV series that we are being inundated with at the moment, Revolution (Season 1 out now on DVD and Blu-ray) is something of breath of fresh air because it is one of the most plausible in that there are no aliens and no zombies.

In this series a group of scientists have killed all the power. Nothing mechanical or electrical functions any more. Whether it was accidental or deliberate is not revealed until the latter half of the first season, and even then it is still not clear exactly what happened and who is responsible.

Of course, being set in America, old habits die hard and instead of seeing this as an opportunity to wipe the slate clean and make a fresh start, land grabbing and militarism are very much the order of the day as different factions fight for control, with the usual misguided zeal of doing the "right thing" for "the people", but always motivated by self interest.

The show creates a world filled with interesting characters that are nearly all flawed and conflicted, and although the idea for it being of one with electricity, it still doesn't fully address the questions that need answering, such as; why doesn't anyone ride bikes? Where are all the nice clean uniforms coming from? Who is making all the weapons they keep using?

These were all questions I put to four of the lead actors David Lyons and Giancarlo Esposito, and Billy Burke and Tracy Spiridakos.

The series should act as a warning to us all that our reliance on digital archiving is not such a good idea, because without electricity it doesn't exist. If we don't want to make this period of history potentially the New Dark Ages of the future where there is no record of our cultural heritage, then we do need to give real consideration to analogue archiving.

Revolution Season 1 is out now on DVD and Blu-ray.