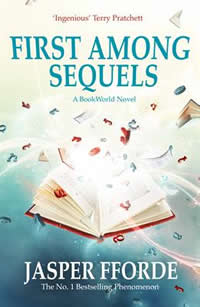 This is the (unless I'm wrong) fifth book to feature Thursday Next and her adventures in BookWorld and despite officially being retired and running the ACME carpet store, our heroine - who remarkably is now 52 - doesn't seem to be settling into the quiet life at all, in fact far from it. She's still working as an undercover Spec Ops agent, jumping in and out of the BookWorld to solve literary crimes or prevent infractions that might interrupt the continuity of the narrative, she's still sparring with Jurisfiction, still fighting the Goliath Corporation, still smuggling cheese in from Wales to make ends meet and doing all this while keeping it secret from her husband, Landen Parke-Laine.

In this instalment, Thursday's Uncle Mycroft appears to her, 6 years after his death to tell her something, only he can't remember what it is, and her son, Friday, who will one day rise to the highest level of power within the ChronoGuard, refuses to follow his own timeline and join-up, and if he doesn't get out of bed soon and do something about it, his future self will lose patience and take care of the situation on his own. On top of that, the would-be partners that Jurisfiction have her paired with are both versions of her from the books of her adventures, Thursday1-4 is a gung-ho, shoot first version bent on replacing the real Thursday Next and taking control of BookWorld and Thursday5 is the pacifist, organic tea-drinking version from the one that didn't sell too well. Added to this mix are the constant worry over Outlander (that's you and me) reading rates keep dropping, battles with demon carpet customers and The Goliath Corporation once again trying to find a way into the BookWorld, and you know that anything could, and probably will, happen in the next 400 pages.

Japser Fforde is without doubt a tremendous writer and I'm pretty certain I've read everything he's put out and enjoyed them all immensely. In conversations he's usually bundled-in with other comedy/fantasy writers like Robert Rankin, Tom Holt or Malcolm Pryce - all tremendously talented and funny writers - but Fforde's stuff is unique amongst them. From his bizarre take on the modern world to his witty one-liners, very clever literary puns, complex plotting, funny, almost philosophical, musings on everything from mall shopping to reality TV, religion, politics, the media and much more besides, he has a point of view that will at once charm you and make you laugh out loud; you will remember a Jasper Fforde novel long after you finish reading it.

First Among Sequels is no exception. Chock-full of wit and intelligence, the trademark complex plot will keep you guessing till the end and, if it rambles a bit at times, you won't mind because the journey is so enjoyable. And that's kind of the point, I think. The joy of reading Jasper Fforde is the joy of reading, the words are clever and generous and funny and witty and charming and smart and you read them for the joy of reading, not because you're waiting for the first-act inciting incident or the midpoint turnaround, that's not what they're about, although those things are there for those that need them.

Not quite as action-packed as others in the series, but then our heroine is no longer a young woman, it is nevertheless reasonably well paced, gathering enough momentum towards the climax to keep you interested and, for those already familiar with the series, introducing enough new concepts and new characters to keep things fresh.

For my part these books they come highly recommended - along with the extras and deleted scenes on the authors website - and they are a rare joy for wordsmiths and lovers of literature everywhere. Nevermind the labels, comedy/satire/fantasy, just pick one up, it doesn't matter which, and give it a try, you'll be thankful that you did for a long time.

First Among Sequels is published by Hodder & Stoughton and is available from Play.com, Blackwell and all good book stores.