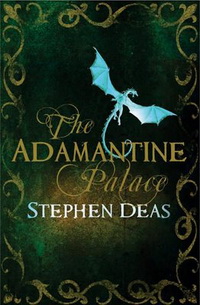 Dragons eh? Can't live with 'em, can't seem to stop people writing about 'em. I mean, I don't have any particular animosity towards them, but I'm always wary of fantasy with dragons because often they come across as a bit grouchy but ultimately everyone's best friend and protector, like having an all-powerful, fire-breathing pony to fly around on that, incidentally, doesn't really need to eat 1000 tons of meat a day and piss lakes of acid wherever it stands. Still, lots of folk like them, and I'm probably being a bit curmudgeonly, thus I approached The Adamantine Palace with an open mind, and a big glass of red wine, just in case.

Stephen Deas novel has, at it's centre, a world of dragon-kings and -queens that rule the lands with iron fists using a hierarchy that depends on numbers of dragons owned. The dragons are kept in isolated, mountain eyries where the eggs are tended for lengthy periods and the young dragons nurtured until they can be bonded to a 'scales', who will be their keeper from that moment on. The twist in the tale is that the dragons are kept on a strict and regular regimen of drugs, administered by Alchemists, to keep them docile and in-check, allowing them to be ridden or traded as required. It doesn't pay to keep a dragon away from the eyrie for very long....

Against this backdrop we have a young dragon, a 'perfect white', rare and valuable, that is to be given to Prince Jehal by Queen Shezira as a wedding gift when he joins together with her daughter, Princess Lystra. But this isn't love's young dream, it's just another power-play amongst the ruling classes who are constantly fighting political battles, aligning in different factions, plotting to gain favour and power which over the years has been laced with murder, lust, betrayal, intrigue and the general bad behaviour expected of the type. It soon becomes apparent that this wedding is not going to go smoothly, Jehal and his lover, Zafir, are plotting to disrupt the long agreed plans by playing both sides off against each other and between them they want succession to the role of Speaker, ruler of The Adamantine Palace, and to take two of the most powerful realms in the land for their own.

Meanwhile, on route to Jehal's for the wedding, the party are attacked and the 'white' goes missing. Shezira's men start a search for the animal but it becomes apparent that the dragon has disappeared with his 'Scales' and there doesn't seem to be any clues as to where or why. Meanwhile, off the 'meds', the dragon begins to see and hear much more clearly, the history of dragon-kind revealing itself to her in long-dormant collective memories while, slowly realising the power she possesses, the innate desire to hunt and kill humans is rekindled.

At the core of this book lies a terrific idea - dragons bound to humans through the use drugs, escape their masters and begin to exact revenge - and I'm hoping against hope that Mr Deas plays out much more of that idea in the coming books because the rest of the story is, frankly, confusing and a bit dull. I say this because the bulk of this book is a muddle of unoriginal political intrigue that he tries to enliven with bad sex and clumsy violence interspersed with some unnecessary info-dumping about the world in which the story is set.

To start with, the characters are uneven and we spend far too much time with the ones that are the least interesting. The anti-hero Jehal, at the centre of a lot what goes on, is a cartoon villain, showing little wit or intelligence throughout and seemingly coming to power by doing nothing more extraordinary than bedding all and sundry. Add to this a world where women are deemed unequal to men, used as pawns in arranged marriages or for sexual favours, a world weary queen who balks at using her daughters this way does nothing to change the situation, and yet she has plenty of dragons and thus plenty of power. All this while Sollos, a Sell-Sword and one of the more interesting characters, gets very little page time as do the mysterious Taiytakei who I'm hoping we see much more of in later books.

The world itself is also under-developed, we learn nothing about the city where the Adamantine Palace is based, know nothing of its streets or its people and, while we get glimpses of the palaces of the other kings and queens there doesn't seem to be anything in-between, no small towns, no villages, no farms. Even so it took me a while to figure out why it doesn't gel and it's just that, while there are some decent set pieces and some of the parts are intriguing, what's really lacking is detail. The plot lacks "the promise of the premise" and the lack of detail makes for short sentences, short chapters and a narrative that never truly engages on an emotional level.

Having said all that, this is very much a first book. There's an enormous amount set up and so I would hope that down the line an enormous amount that will pay off. The writing, while sparse, isn't bad and it does propel the story forward at a decent clip and the dragons, well the 'white' at least, you'll be happy to know, can be vicious, snarling, untamed beasts that will eat you as soon as look at you and, in one nice scene, demonstrate the utter contempt for, and lack of empathy with humans that makes them so much more than many dragons that have come before.

So an uneven start to The Adamantine Palace but one that, despite its flaws, has real potential - as long as we stop sodding about in dark corridors and bedrooms and start seeing more major dragon action. In detail.

The Adamantine Palace is published by Gollancz and is available from Play.com, Blackwell and all good book stores.