The Rats And The Ruling Sea 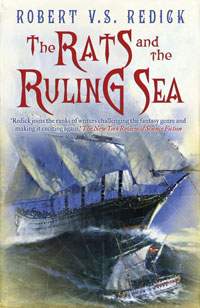 When The Rats And The Ruling Sea turned up I was instantly captured by an intriguing title and the cover art by Les Edwards (aka 2008 World Fantasy Award Winner Edward Miller), it seems I'm getting drawn to tales of fantasy and derring-do on the high seas as I drift inexorably into my dotage and this hit all the right buttons. Then joy-of-joys I realise that it's forerunner, The Red Wolf Conspiracy had been sat on my bookshelf unread for months, there was nothing for it, I delved into book one and then straight into book two without a break and loved practically every page.

Briefly, book one introduces us the the Great Ship, The E.M.S. Chathrand. Built 600 years ago by a mix of mages and master craftsmen this vast behemoth is the last of her kind, and the secrets of her construction were buried long ago along with her creators. As the pride of the imperial fleet The Chathrand is the natural choice for a great diplomatic voyage to seal peace with the last of the Emperor's enemies. Amongst the 1000 souls aboard the ship will be The Emperor's Ambassador, Isiq, and his daughter, Thasha, who is being forced to wed a Mzithrini prince to broker this peace as a treaty bride. There is also Isiq's wife, the beautiful and duplicitous Syrarys, the sadistic Captain, Nilus Rose and his Aunt, Lady Oggosk, The sorcerer Arunis, the power behind the Shaggat Ness, a master spy by the name of Sandor Ott and six assassins, 100 imperial marines, a small band of Ixchel, 8 inch high creatures that sneaked aboard and now hide below decks amongst the rats and Pazel the tarboy gifted and cursed by his mothers spell that enables him to know any language. 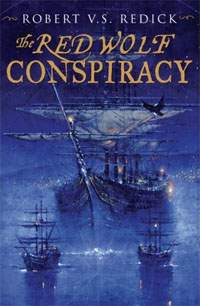 But behind this plan for peace lies a deep treachery, years in the planning, that goes all the way to to the emperor himself. A small cadre of the powerful and influential have persuaded the emperor to fund this plan in order to kill Thasha and thus bring to pass an old prophecy that they themselves have concocted where a self-proclaimed Mzithrini God, The Shaggat Ness, that they have kept locked away on a tiny prison island, will be 'resurrected' and bring his followers together and overthrow the the five kings of the Mzithrini empire. The resulting war will bring the Mzithrini's to their knees, financially and militarily, and the Arqual and it's Emperor can send in his fleets and claim the land for himself with barely a shot fired.

Book two begins where book one ended. Thasha, Pazel and assorted others have banded together to fight this plan but despite some success at foiling Arunis' plans to use the newly discovered nilstone to destroy humankind, both sides have now reached deadlock. Thasha's wedding is still just hours away, promising to both fulfil the promise of a mad god's return and see her murdered but can Thasha's friends save her from this fate? Can the war between two Empires be stopped? Can Arunis be prevented from mastering the oilstone? While the unlikely friends ponder their fate, both the rats and the Ixchel are putting their own plans into action, each wanting control of the ship and use it for their own ends and now The Chathrand and her crew must brave the terror of the uncharted Ruling Sea and the massive ship-swallowing whirlpool known as the vortex to reach lands in the South forgotten by the Northern world.

Wow! Where to begin? The Chathrand Voyage series is immense, the sheer scale and scope of the storytelling is breathtaking enough, but the labyrinthine plot twists and turns in ways that, while sometimes inevitable given the nature of storytelling, still surprises and always delights. Every page too is crammed with complex, beautifully layered characters, each with a unique voice and their own powerful motivations, in fact if you stopped to count you would be dumbfounded as to how many there are and yet surprisingly, they each get their moment in the spotlight, even the relatively minor ones. Admittedly there are some stereotypes - the bad guys are nasty and the good guys are nice - but even so, they're well drawn with little waste.

Despite the nautical nature of the tale, the language is easy to get to grips with, flowing effortlessly and making the pace - though relentless at times - easy to deal with and the battle scenes and high seas chases real page-turners. Despite the use of mages and magic, there is a real light touch to that stuff making the books a proper adventure story where courage and ingenuity play more of a part then wielding any kind of magical power ever does, and its use means a big price to pay for those that do so it's never a 'magic trumps all' storyline.

In fact the world-building generally is very impressive and full of imagination down to small details. It would take hours to detail everything but there are 'woken' animals (ordinary animals and birds that talk and think as humans), there is the Eguar, the Cazencian Whales and plenty of non-human races like The Ixchel, the Sea Murths, Augrongs, Flikkermen and The Dlömu, each with it's own customs, culture and religion. The humans are equally diverse, as well as the Arquali sailors, spies and merchants their are the Mzithrini and their sfvantskor, religious warriors and protectors of the faith, the Simjans who are piggy-in-the-middle for these two races as well as Ormali, Thaljassans, Sollochi - the list is endless and gives this world an epic scale that Redick manages to balance expertly within the story.

If I have one gripe, and I usually do, it's that at almost 600 pages The Rats And The Ruling Sea is too long when, a very few pages aside, it all takes place on one ship - even a giant like The Chathrand. Looking back I realise that with such a complex plot, and with two books still to go, there's almost as much that needs setting up as needs resolving and it takes time to do that well but despite this I never once wanted to put it down and that's as good a recommend as any book can get.

The Rats & The Ruling Sea is published by Gollancz and is available fromPlay.com, Blackwell, and all good book stores.

Robert V S Redick has a blog and a website and the books themselves also have a website.