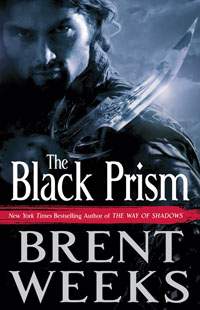 Gavin Guile can draft the entire spectrum of light and this has enabled him to become High Priest of The Chromeria, Emperor of the seven Satrapies and the most powerful man in the world. Gavin Guile is The Prism. But in the outlying satrapies there are those who question the position of the Chromeria as the sole arbiters of the power of light, and following the great war which brought Gavin to power a tenuous peace is only held in place by his political charm and immense drafting talent. But over use of drafting will weaken any drafter's power, bringing about madness and eventually death, and Prism's never last too long - seven years usually, occasionally fourteen. Gavin has been Prism for sixteen years and even though he has lasted far longer than most, he knows he probably only has five years left - five years to achieve five impossible goals. But Gavin's well ordered plans are thrown for a loop when he discovers he has a bastard son in a far off village, and when that village comes under attack from a would-be king who has renounced the Chromeria and its rule, swearing to take back lands he feels are rightfully his and challenging the Prism and all he stands for, Gavin must act fast to rescue the boy, setting into motion the prospect of a new war and forcing Gavin to decide what price he's willing to pay to protect the secret he keeps that could tear the whole world apart.

The Black Prism is book one in New York Times best-selling author Brent Weeks' Lightbringer series, and it is epic fantasy at its best. Told through multiple viewpoints and through events in multiple locations it revels in political machinations, courtly intrigue, big battle scenes, non-stop action, secrets and lies and drama - all the best ingredients that make a story worth telling. I was hooked in from the first page and couldn't put it down, even at the last. It is, quite frankly, superb.

One of its great strengths is that none of the beautifully drawn main characters is completely good or bad, they are just one side of an argument with many shades of grey, and even though there are times when each of them does distasteful things, Weeks does an excellent job of making their actions seem justifiable in light of circumstances. This is very tricky to pull off as there are very definitely two camps and they very definitely go to war but even when the other side commits reprehensible atrocities as part of a campaign of war - and believe me, the author pulls no punches in the gore department, as a reader it's still possible to play devils advocate and see both sides and it's this power in the writing that really lifts it above the morass of epic fantasy novels out there.

But the real triumph of the book is the magic system the Weeks employs to bring the whole thing to life and it's impossible to discuss The Black Prism without at least touching on it. A drafter can see the colours of light, usually only in a certain spectrum say, green or blue or red but the ability to see more than one colour is not uncommon so you have monochromes, bi-chromes and polychromes. Drafters can use the light to form a physical substance called 'luxin' which they can use to create physical objects. On their own this would usually be small things like ornaments or furniture but in groups they can combine to create an entire building and by layering the different luxins, blue and green layers surrounded by yellow for example, the objects can be stronger or more flexible or longer lasting and so on. The real power of the drafter lies in being able to improvise weapons during a fight or conjure transport, such as a boat, when needed and being able to adapt or repair these things instantly, as needed. The irony is that every time you draft, the body is damaged in some small way and while it can heal itself, over time the very ability that gives the drafter power will eventually lead to their death, for men this means around forty years old and for women around fifty.

While this quick sketch makes it all sound simple, in practice the detail actually makes it pretty complex and in truth it took me a little while to get my head around it. Weeks must have known this would be an issue so there are several places in the book where a novice drafter, being taught the ins-and-outs of chromaturgy, receives a lesson that also serves to inform the reader about the system. Sadly these scenes are telegraphed in an obvious way but the magic opens the story up up to some truly inventive scenes and the rest of the book is so good, and the system so interesting, that it's quickly forgiven.

The other thing about such an inventive and original magic is that it informs the entire world in which the story takes place. The Chromeria, built on two islands in the north western corner of the Cerulean Sea, presides over the seven satrapies outlined on the map at the front of the book. The is where young drafters are brought to be tested and, if successful, trained in the chromaturgic arts. This is also where the ruling council, led by The White and defended by the Black Guard and comprising members of each of satrapy, each of whom has a dominant colour, sits to debate policy and exert control over the entire empire, which means politics and power plays and arranged marriages and the usual high stakes games are constantly being played out although ultimate power rests with The Prism.

So the magic drives the plot which in turn is driven by the magic and so on and it works really well. There's a tremendous energy to the way Weeks writes that carries you enthusiastically along and there's no let up in the action even as the complexity of the plot slowly unveils itself. The relationships between the central characters are fully believable and well played-out, filled with revelations and recriminations in equal measure as the story twists and turns its way through the pages and the final scene, which is deftly foreshadowed, is as brilliant as it is surprising, setting up what will surely be a fabulous second instalment and one for which I simply cannot wait.

The Black Prism is published by Orbit, through Little Brown, and is available from Play.com, Blackwell and all good book stores.

There is a dedicated blog for the book here, and Brent Weeks' official website is over here.