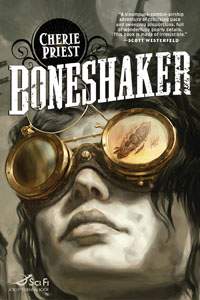 I've made a conscious decision that I need to read more steampunk. Sure I like the aesthetic sensibility, but also, and uniquely amongst SF/F sub-genres, it offers a delightfully eclectic mix of retro-technology and the utterly fantastic that really appeals. Boneshaker, which has been on my radar for a while, falls squarely into that steampunk category and also adds something of the zombie horror novel into the mix and it's really rather good.

Because I couldn't possibly do any better job than the author, I'll start by lifting the setting of the novel direct from The Clockwork Century website:

It is 1880. The American Civil War has raged for nearly two decades, driving technology in strange and terrible directions. Combat dirigibles skulk across the sky and armored vehicles crawl along the land. Military scientists twist the laws of man and nature, and barter their souls for weapons powered by light, fire, and steam.

But life struggles forward for soldiers and ordinary citizens. The fractured nation is dotted with stricken towns and epic scenes of devastation - some man-made, and some more mysterious. In the western territories cities are swallowed by gas and walled away to rot while the frontiers are strip-mined for resources. On the borders between North and South, spies scour and scheme, and smugglers build economies more stable than their governments.

This is the Clockwork Century. It is dark here, and different.

It makes you want to run out and buy the book straight away doesn't it.

And so to the story itself. Following the Klondike Goldrush, Seattle grows to become a bustling city of 40,000 people. Sensing there is more gold in them thar hills, Russia announces a contest inviting inventors and engineers to design a machine that can mine through the ice. The winner, Dr. Leviticus Blue, was contracted to build his Incredible Bone-shaking Drill Engine and after six months of work and testing, one day he got into his machine and drilled his way underground all the way from his home on Denny Hill into the central business district. Many buildings - including four major banks - collapse and are destroyed and Leviticus Blue is killed, but in the ensuing mayhem a toxic gas they called the Blight is released from the earth leaving everyone who breathes it infected with a disease that leaves them as walking dead, 'rotters', craving human flesh. As the infection spreads, the authorities, in an effort to maintain the security of the city, erect a two hundred foot high wall around the effected area keeping the blight contained and sealing-in the 'rotters' and what few residents that had nowhere else to go.

Fifteen years later, Blue's widow is living just outside the wall under her maiden name, Briar Wilkes, eeking out a meagre living as a factory worker while trying to take care of their son Ezekiel, or 'Zeke'. It's a strange existence for them both. On the one hand they are tormented by those who vilify the name 'Blue' as the cause of all that is wrong with the world, on the other they are the daughter and grandson of Maynard Wilkes, a local lawman and a folk hero to ordinary men because in the early days of the chaos he sacrificed his life to rescue a group people who had been left to die at the hands of the blight. But while Briar wants to forget the past and build a future for her and her son, Zeke has reached the age when he wants to known the truth about his father, believing he can prove him innocent of any wrong-doing and make both their lives better, so one day he crosses under the wall to find his parents old home. But events conspire against him and he gets stranded until, figuring out what has happened, Briar has no option but to cross the wall herself to find him.

Boneshaker has all the usual steampunk tropes, the 'infernal machines', the dirigibles, the brass and leather and woodwork but these are just trimmings, the real meat of the thing is the characters. The central characters of Briar and Zeke are really strong and as the story switches point of view while we follow each in turn they open up nicely, revealing slightly more each time. But the supporting cast also are all nicely written, given their growing time and rendered in enough detail to give them unique personalities and individual voices which is just as well as there are a lot of them!

It can be difficult to mix genres well at the best of times and horror/steampunk is as different as it comes but Priest does a nice job describing the eery silence of the walled city and the apparent isolation of being locked into a gas mask while journeying both above and beneath the streets trying to keep a step ahead of the 'rotters'. As you would hope, the action, when it comes, comes thick and fast with edge-of-the-seat chase scenes, exciting escapes and flat-out fighting and overall the pacing of the book is just about right, giving the reader enough time to breathe between the action scenes and revealing just enough about character in the quieter scenes to keep you hooked in all the way through.

Cherie Priest has undoubtedly crafted an emotionally compelling and utterly gripping action/rescue story, but what makes it even better is that the setting - for a change not Victorian London - is so well researched and well presented that it is completely credible as an alternate history. There's a lot of the post-apocalypse in here too, the people we meet behind the wall are pioneers, making use of what they can find and what they can make to build a near-normal life in a place where most sensible, not to mention law-abiding, folk wouldn't venture and it's to Priest's eternal credit that she manages to meld these various disparate literary pieces into a quite beguiling whole without any of them feeling laboured or forced or out of place.

Boneshaker is a fine book and one I'm very glad I bought. It's the first in The Clockwork Century series and as the second book, Dreadnought, is already out I, for one, shall definitely be buying it, only next time, I won't wait so long.

Boneshaker is published by Tor through Pan Macmillan and is available from Play.com, Blackwell and all good book stores.

Cherie Priest has a website and she also Tweets. For fans of the book there is a dedicated Clockwork Century website.