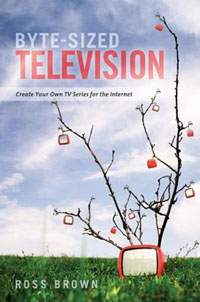 Ross Brown began his writing career on NBC’s award-winning comedy series The Cosby Show and went on to write and produce such hit TV shows as The Facts of Life, Who’s the Boss? and Step by Step. He has also created primetime series for ABC, CBS, and the WB so it's fair to say that he knows his stuff when it comes to series creation, and now he has created the perfect book for those looking to get into broadcast media on the web.

Byte Sized Television starts at the very beginning by defining the webisode and talks about how to create an online series that will have the kind of lasting appeal that will turn surfers into viewers, covering how to come up with compelling characters, creating the world of your series and eventually discussing how to build on your pilot and come up with episode ideas.

Brown's writing style is very breezy and very friendly, he talks at length about the creative aspects of serialised content, why some stuff works and other stuff doesn't and while none of this is a prescription for success his lessons make perfect sense so hopefully you won't go hell-for-leather trying to make a series from a sketch.

The book then walks the reader through the entire production process, starting at the pilot, looking at story and script, looking at visual style and then turning to practical concerns like equipment and budget. That done, we move into pre-production through production and onto post-production, examining each process in turn and then into the nitty-gritty of posting your show on the internet.

Through all this the emphasis is firmly on getting the thing made. Brown never gets bogged down with the technical stuff - this isn't the place for discussions about codecs and megapixels – Brown's thing is to write a great story and go shoot it, but make the effort to do it well and it's good advice.

Finally there's a bunch of recommended reading to follow up with and some interviews with creators and a great section on syllabi and course outlines for teachers aimed at folk who want to take these ideas forward, encourage the next generation of writers, producers and directors to get started at as young an age as possible.

I'd thoroughly recommend Byte Sized Television to anyone wanting to make series TV and maybe thinking about the web as the place to find their audience, because what Ross Brown does, beyond doubt, is prove that the barriers to entry are non-existant and we should all get creative right now!

Byte Sized Television: Create Your Own TV Series for the Internet

is published by Michael Wiese Books and is available from Amazon

, Blackwell and all good book stores.

Ross Brown is an Assistant Professor of Film and Media Arts at Chapman University in Orange, CA, where he developed a series of cutting-edge courses on creating TV series for the Internet. For updates to Byte Sized Television and the latest news and information on the world of web series, check out Ross’s website.