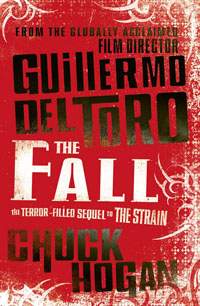 This, the second in the series of vampire novels from Del Toro and Hogan, carries on from where the last book left off but sets out down an even darker - if that were possible - road to the end of humanity.

Ephraim Goodweather, discredited and accused of murder, is in hiding with his son, Zack. Abraham Setrakian has failed in his attempt to destroy the Master Vampire, Jusef Sardu, but Sardu only barely escaped and with a rapidly decomposing body he needs a new host. Ephraim's wife, Kelly, now a newly turned vampire with an overwhelming need to gather her 'Dear One', Zach, to her so she can feed on him and turn him, is being used by Sardu to track the group and Zack is still not ready to believe his mother means him harm.

With no-one in authority willing or able to take them seriously the two men, along with Ephraim's girlfriend, Nora and the amazing exterminator, Fet, hatch a plan to bid for the 'Occido Lumen' or 'Silver Codex' at Sotheby's as it contains the secret of how to kill Sardu and rid the world of vampires. Meanwhile billionaire Eldritch Palmer continues with his plans to betray mankind to Sardu as he continues to court immortality and a new and more terrifying plan to bring about the Eternal Night when vampires can rule without end has been set in motion.

It's fair to say that like it's predecessor this book fairly crackles along with a story that becomes richer and more complex and also much, much darker. Our hapless band of heroes comes up against increasingly bigger and bolder opposition and, as the strain that makes people into vampires takes hold, the streets and buildings of New York become a more and more dangerous place to be.

Like all middle books it doesn't move the story forward quite as fast as maybe we'd like but we do get much more backstory on the characters, particularly mysterious pawnbroker Setrakian, his ongoing battle with Sardu and the importance of the Silver Codex. We also get some new characters, notably ex-wrestler Angel Hurtado, and we see people begin to take the battle to the vampires as groups of vigilantes spring into action and move underground to destroy the vampire nests. There is also an interesting subplot involving in-fighting amongst the vampires themselves as the older Ancients see the new vampires as a threat to their food supply and move to curb them and Sardu seeks revenge for previous wrongdoing by the Ancients all of which brings a nice political element to proceedings.

But none of this slows things down at all, in fact the pace is pretty relentless throughout and, as you would expect from masters of the genre, the action scenes are intense and exciting and the deaths are horrific, being equal parts gory, brutal and visceral. As you'd expect there are losses along the way and the book ends on such a downbeat note that you wonder where if it can possibly go up but it's a real cliffhanger-ending that will no doubt leave you gasping to read the next one.

So these are not sparkly, twinkly vampires we're dealing with here, there's no breathy, touchy-feely nonsense, they are evil personified with a single aim, to bring the world to its knees and then feed on it, and it's this that makes these vampire books utterly compelling reading, the way great horror novels should be.

The Fall is published by Harper Collins and is available from Play.com, Blackwell and all good book stores.